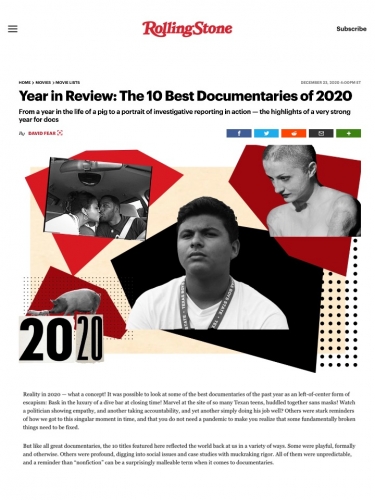 Reality in 2020 — what a concept! It was possible to look at some of the best documentaries of the past year as an left-of-center form of escapism: Bask in the luxury of a dive bar at closing time! Marvel at the site of so many Texan teens, huddled together sans masks! Watch a politician showing empathy, and another taking accountability, and yet another simply doing his job well? Others were stark reminders of how we got to this singular moment in time, and that you do not need a pandemic to make you realize that some fundamentally broken things need to be fixed.

But like all great documentaries, the 10 titles featured here reflected the world back at us in a variety of ways. Some were playful, formally and otherwise. Others were profound, digging into social issues and case studies with muckraking rigor. All of them were unpredictable, and a reminder than “nonfiction” can be a surprisingly malleable term when it comes to documentaries.

10: 'The Painter and the Thief'
It starts with a crime. The Czech artist Barbora Kysilkova is exhibiting her work in an Oslo gallery when two paintings are stolen. She later confronts one of the thieves, Karl Bertil-Nordland, who says he stole them “because they were beautiful.” Naturally, Kysilkova asks if she can paint him, and the two soon find themselves unexpectedly enmeshed in each other’s lives. A look at the art of healing and the healing power of art, Benjamin Ree’s documentary on a most curious friendship ends up delving into the past of both subjects, and excavating lifetimes of pain, trauma, good and bad decisions. You can be successfully creative or you can end taking a much more crooked path, the film suggests — but either way, your life is worthy or compassion and consideration.

9: 'The Truffle Hunters'
Some of them have been doing this well into the 80s; other have logged in a little less then 10 years. But all of these Italian men — and their dogs; they’re always with their trusted canine friends — have dedicated their lives to going deep into the woods, in search of the rarest of rare white Alba truffles. Once they’ve found their prizes, they sell these rare delicacies to high-bidding food brokers and restaurateurs. (Warning: Don’t see it on an empty stomach.) “Delightful” is an overused word, but it’s the best way to sum up Gregory Kershaw and Michael Dweck’s look at the sometimes competitive, sometimes contentious, always cantankerous world of hunters and gatherers. The fact that we saw it at a film festival — it received a brief qualifying run in early December, and will get a wider release in the spring of 2021 — only sweetened the deal: Where better to see something that doubles as a look at a symbiotic ecosphere regarding those who dig for hidden treasures, those that distribute and profit from such findings, and those that critique and consume them?

8: 'Gunda'
Here, piggy, piggy! Russian filmmaker Victor Kossakovsky, he of the speed-metal soundtracked water documentary Aquarela (2019), trains his cameras on a massive porker named Gunda, who lives on a farm in Norway. She goes about her business of tending to her piglets and wallowing around the mud. Occasionally, she and her brood commune with the other animals, notable a one-legged chicken who’s gives you the most memorable portrait of resourceful screen poultry this side of Werner Herzog’s Stroszek. Sow far, sow good (sorry) — and then what appears to be an unassuming, black-and-white nature doc of sorts subtly switches gears, and this seemingly free-form portrait reveals itself to be something far more poetic and moving. The last five minutes have lingered with us in ways we still can’t begin to fathom.

7: 'City Hall'
Of course an entry from our greatest living documentarian, still turning out marathon-length masterpieces at a consistent rate, would be present and accounted for here. “I don’t think we do a good enough job of telling that story [of] what we actually do in the city … of tying it all together,” says Boston’s mayor Marty Walsh. So Wiseman rectifies this connect-the-dots oversight over a four-and-a-half hour chronicle that covers roughly a year in the bureaucratic life of a major metropolis’ headquarters. Like virtually all of the 90 year-old filmmaker’s work, it’s a long, hard look at the inner life of an institution, as well as the city it serves: the war veterans, the well-off, the socially disenfranchised, the bluebloods, the blue-collar workers, the townies, the Ivory-Tower college professors, the stoic policemen and the screaming “Red Sooooxxxxxx” paradegoers. It’s an epic of civics and, more often than not, civil discourse — a mural of everyday life that is so rich in detail and insight that even its extended running time feels too short.

6: 'Bloody Nose, Empty Pockets'
Bill and Turner Ross’s look at the last 24 hours of a Vegas dive bar appears to be simple, fly-on-the-Schlitz-soaked-wall verité; the truth about what’s happening in front of the camera is much more interesting and complicated. (Their Sin City tavern is in New Orleans, for starters; the whole story behind the film’s construction can be found here.) If you can get past the fiction v. nonfiction argument, however, what you will find is a sort of petri dish experiment in which sad sacks and sodden philosophers are given room to bounce off each other. It’s less a long goodbye to a drinking establishment then an exploration of the community that calls such places home and their fellow barflies family — and what happens when you take away that collective space after the very last call. Closing time, indeed.

5: 'Boys State'
For decades, the American Legion has run a program called “Boys State,” in which promising young men are selected to form a mock government in one week, complete with stump speeches and elections. (Its alumnus include Cory Booker and Dick Cheney.) Filmmakers Jesse Moss and Amanda McBaine (The Overnighters) embed themselves with a host of Texas teens as they get a firsthand look at how the sausage of modern politics is made — and observe how tomorrow’s Obamas, Trumps and Karl Roves replicate the agonies and ecstasies of our currently broken two-party system down to the last smear campaign. An absolutely compelling and often alarming tag-along doc that also helped introduce a few young politicos we imagine we’ll be hearing from in the next few years.

4: 'Dick Johnson Is Dead'
Or rather, Dick Johnson is slowly succumbing to dementia and dying. So Kirsten Johnson (Cameraperson) does what any good daughter would do: She makes a movie about him, filled with staged scenes of him shuffling off this mortal coil via falling air conditioners, hit-and-run accidents and fatal cardiac arrests. This may be the most lighthearted, uplifting movie about death ever concocted, as well as an act of catharsis for both those behind the camera and in the audience. The more Johnson inoculates herself against future grief one grisly mock-killing at a time, the more you sense the love and affection behind this conspiratorial project and celebration of a life. Come for the sight of an old man getting “stabbed” in the jugular vein; stay for the Pierre et Gilles-like heavenly scenarios involving tap dancers, confetti and an exasperated Christ.

3: 'Time'
After her husband went to prison for bank robbery, Fox Rich began keeping a sort of black-and-white video diary. Her son was four; she was also pregnant with twins. Over the next two decades, Rich would raise her kids to be outstanding young men, become a bestselling author, lecture groups about the art of the memoir and establish herself as a prison-reform activist. She would also work tirelessly to get her spouse freed from a life sentence. A stream-of-consciousness trip through one woman’s story, Garrett Bradley’s doc assembles both Rich’s home movies and her own footage to craft an intimate, inimitable look at the toll that the mass-incarceration epidemic takes on everyone involved. Yet it never treats its subject dogmatically, and simply presents a highly personal interpretation on the title’s numerous meanings — the passage of time, doing time, time waits for no one. And just when you think things could not get more emotionally resonant, the movie turns what might have been a gimmicky trick into a sublime realization of how what’s been lost can be magically recaptured. Simply stunning.

2: 'American Utopia'
Spike Lee captures David Byrne’s recent Broadway performance-art-cum-greatest-hits revue for posterity, and ends up delivering way, way more than just a concert film. It’s the sort of joyous collaboration between a filmmaker and a musician that lifts up the form much the way Byrne and his gray-suited band of singers, dancers and instrumentalists lift up the audience’s (and your) spirits. Lee snakes his camera through the performers onstage, gives you perspectives ranging from the rafters to the back rows and enhances several numbers (notably their cover of Janelle Monae’s protest song “Hell You Talmbout”). And like the production, it’s a wonderful showcase for Byne’s outsider-artist optimism that, for two hours, makes you feel the title’s two words aren’t contradictory.

1: 'Collective'
On October 30th, 2015, in a rock club in Bucharest named Colectiv, a fire killed 27 people and injured another 180. There was enough public outrage to cause protests and a shift in Romania’s government. And then a journalist at a sports newspaper began to hear about some of the club patrons dying while convalescing in the hospital. He and his team of investigative reporters decide to dig a little deeper — and a national scandal soon gets bigger, and more far-reaching, and and more devastating with every new revelation. For moviegoers who’ve been following the Romanian New Wave since it started cresting in the mid-aughts, Alexander Alexander Nanau’s documentary will play like a perfect nonfiction companion piece to the country’s bounty of fictional dramas and black, bleak comedies. For everyone else, this muckraking procedural will feel like a docu-version of films like All the President’s Men and Spotlight, where tense conversations around conference tables, writers huddled over computers, and editors issuing orders from behind desks make for compelling drama. And by the film’s end, the title starts to take on an entirely different meaning.