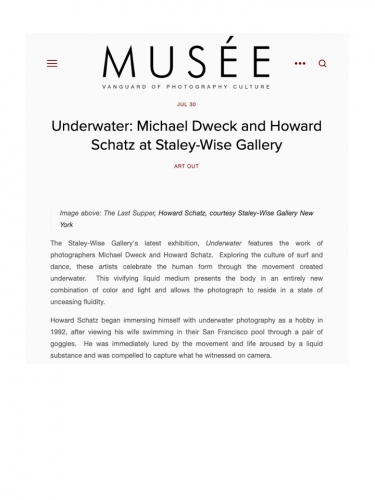 The Staley-Wise Gallery's latest exhibition, Underwater features the work of photographers Michael Dweck and Howard Schatz.  Exploring the culture of surf and dance, these artists celebrate the human form through the movement created underwater.  This vivifying liquid medium presents the body in an entirely new combination of color and light and allows the photograph to reside in a state of unceasing fluidity.

Howard Schatz began immersing himself with underwater photography as a hobby in 1992, after viewing his wife swimming in their San Francisco pool through a pair of goggles.  He was immediately lured by the movement and life aroused by a liquid substance and was compelled to capture what he witnessed on camera.

Schatz was forced to adapt his techniques in order to compensate for a new set of requirements involving lighting, range, composition, color and resolution.  After six months of weekly trial and error shoots and extensive research, Schatz concluded that he had finally reached success.  He tested his new tactics on a ballerina from the San Francisco Ballet and captured incredibly fluid, organic photographs- several of which can be seen in print at Staley-Wise Gallery.

Three years later and after much professional recognition, Schatz and his wife moved to New York City and he took up photography as a full time occupation.  Schatz's photography has since been published in three books and he continues to work in the field of fine art and the underwater imagery of dancers and swimmers.

Although Michael Dweck's photography focuses more specifically on mermaids and surfers, he faced difficulties similar to those of Schatz when attempting to execute his ideal image.  He was required to reinvent his practice entirely in order to shoot photography in this new, unusual environment.

Since technology for the underwater housing of large format cameras had yet to be in high demand, Dweck designed his own protective cases.  He added features such as weights and pulleys to achieve the desired effects and ultimately to capture the human body in its abstract, liquified form.

It was only natural for Dweck's interest in oceanic photography to hold such relevance after spending his childhood on Long Island, NY.  His first photo book, The End: Montauk, N.Y., serves as an ode to Montauk and the array of people who inhabit the small beach town.  Fishermen and surfers alike mark its pages, advertising an almost-forgotten culture overrun by city and working life.  Dweck's future publications are centered around water, but adopt a more dreamy, reflective approach focusing on the fantasy of mermaids.

Underwater combines Dweck's two main subjects, mermaids and surfers, to create a fantastical narrative between reality and what is imagined.  Black and while silhouettes of flowing female bodies are printed on the surface of surfboards, glowing beneath their glossy finish.