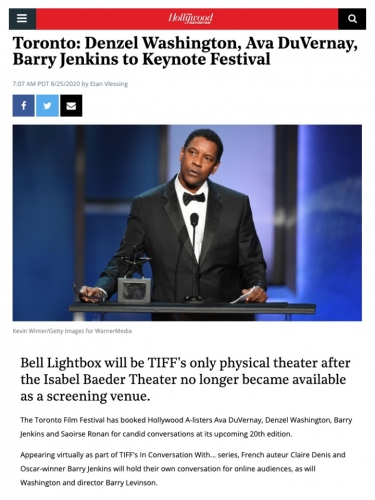 Bell Lightbox will be TIFF's only physical theater after the Isabel Baeder Theater no longer became available as a screening venue.

Appearing virtually as part of TIFF's In Conversation With... series, French auteur Claire Denis and Oscar-winner Barry Jenkins will hold their own conversation for online audiences, as will Washington and director Barry Levinson.

Club Quarantine founder D-Nice and music video director Anthony Mandler will appear digitally as part of their own In Conversation With... session, while DuVernay will separately discuss her art and activism and four-time Oscar nominee Saoirse Ronan will recall her movie career as part of the TIFF keynote series.

Toronto organizers on Monday said Halle Berry will appear virtually to discuss her feature directorial debut, Bruised, as part of the In Conversation With... series.

On Tuesday, TIFF added to its movie lineup Stacey Lee's Underplayed, a documentary about radical female artists; Matthew Heineman's The Boy from Medellín, a portrait of Columbian musician J Balvin; Selma​ star-turned-director David Oyelowo's The Water Man; The Truffle Hunters, by directors ​Michael Dweck and Gregory Kershaw and set in the forests of Italy's Peidmont region; and Wolfwalkers, an animated feature from Tomm Moore and Ross Stewart.

These and other TIFF titles this year will mostly screen digitally, or outdoors, as the festival said it no longer has access to the Isabel Baeder Theater and will only screen films in-person at Bell Lightbox on King Street.