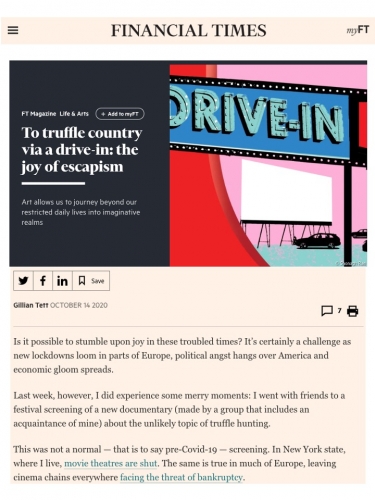 Is it possible to stumble upon joy in these troubled times? It’s certainly a challenge as new lockdowns loom in parts of Europe, political angst hangs over America and economic gloom spreads.

Last week, however, I did experience some merry moments: I went with friends to a festival screening of a new documentary (made by a group that includes an acquaintance of mine) about the unlikely topic of truffle hunting.

This was not a normal — that is to say pre-Covid-19 — screening. In New York state, where I live, movie theatres are shut. The same is true in much of Europe, leaving cinema chains everywhere facing the threat of bankruptcy.

Instead, it was arranged as a drive-in: we parked our cars in a field where a gigantic screen had been erected, watched the film through our windscreens and listened to the soundtrack on the car speakers. Forbidden from leaving our vehicles, we could only toot our horns to show approval.

Still, it seemed to me that the event displayed the cheering ability of human beings to adapt to new circumstances — and reinforced what a joy it is to go out for an evening to experience art with friends, even if they are confined to a car nearby. I fervently hope that more cultural centres stage similar outdoor events across Europe and the US, particularly as long, dark evenings engulf the northern hemisphere.

The occasion also illustrated something else: the importance of finding ways to widen our lens on the world. One effect of a pandemic is to cause our cognitive horizons to collapse: we inevitably become obsessed with events taking place in our own “backyard”, since that is often all we can physically experience.

One way to counter the psychological effects of lockdown is through making mental journeys — by travelling in our minds (whether through screens or books) to snoop around other worlds.

A potential blessing of the current coronavirus saga is that it is occurring at a moment in history when we are more able to do this via films, TV and other forms of media.

The documentary I saw last week, The Truffle Hunters, is a case in point. Before I watched it, I knew little about the truffle business. All was revealed as the film followed a small community of old men and their dogs foraging for truffles in the ancient oak forests of Piedmont in Italy. Watching it was both mesmerising and uplifting.

Michael Dweck, who co-directed and co-produced the film with Gregory Kershaw, spent a year talking with locals before he could begin to locate the truffle hunters — and another two years filming them. “It was hard to win their trust because the hunters have their secrets and they are fourth or fifth generation,” he explains.

Dweck is interested in communities that are rich in tradition and close to nature but his depiction of the truffle hunters is startling, not least because it raises other questions about what ­creates “value” in our existence.

White truffles are one of the most expensive food items in the world. They currently cost about $4,000 a pound but their price fluctuates wildly; they can sell for as much as $10,000 a pound following poor weather.

Their high price demonstrates the power of the law of supply and demand: white truffles are impossible to cultivate and their natural habitat is shrinking. It also reinforces the potency of cultural signalling — or, as the economist and sociologist Thorstein Veblen once pointed out, how elites like to embrace rare fancies to demonstrate their elevated status.

Yet one irony of The Truffle Hunters is that the elites who buy these highly priced fungi often seem bored and joyless, while the old men who are foraging in the woods are so passionate about their craft they insist on doing it well into their eighties, despite others begging them to stop.

This is not because they are reaping fat monetary rewards. One outrageous detail about the truffle business that emerges is that most of the profits get skimmed off by middlemen — leaving some of the hunters understandably railing against capitalist greed. Nonetheless, they clearly love their dogs, their community and their forests and take great pride in what they do.

Maybe this is romantic whimsy on the part of the film-­makers. But I prefer to see it as a sign that “wealth” is not just about having a well-stocked bank account or owning expensive consumer items; it also involves being able to take delight in our work, surroundings, families and whatever passions we have. It is easier to do this when we have the privilege of material blessings — but they are not sufficient in themselves.

To paraphrase a line by Wordsworth, wealth also comes from having the ability to be surprised by joy. Whenever I smell a whiff of truffle, I will try to remember the hunters’ passion for their craft. And as the Covid-19 strictures drag on and on, I urge everyone to seek out documentaries that can offer a window into someone else’s life.

The world of expensive delicacies is fascinating but there are numerous other ones out there — which we can still savour from our all-too-familiar homes.