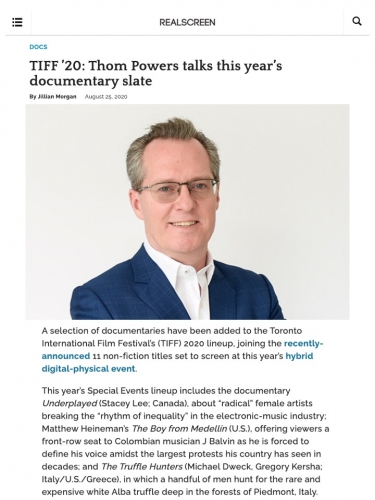 A selection of documentaries have been added to the Toronto International Film Festival’s (TIFF) 2020 lineup, joining the recently-announced 11 non-fiction titles set to screen at this year’s hybrid digital-physical event.

This year’s Special Events lineup includes the documentary Underplayed (Stacey Lee; Canada), about “radical” female artists breaking the “rhythm of inequality” in the electronic-music industry; Matthew Heineman’s The Boy from Medellín (U.S.), offering viewers a front-row seat to Colombian musician J Balvin as he is forced to define his voice amidst the largest protests his country has seen in decades; and The Truffle Hunters (Michael Dweck, Gregory Kersha; Italy/U.S./Greece), in which a handful of men hunt for the rare and expensive white Alba truffle deep in the forests of Piedmont, Italy.

TIFF is also celebrating the 25-year anniversary of Planet Africa. Created in 1995 by the festival’s co-head Cameron Bailey, the program was dedicated to cinema from Africa and the African diaspora, and ran for 10 years.

Organizers selected four new films for its Official Selection that “embody the spirit of Planet Africa,” including Dieudo Hamadi’s Downstream to Kinshasa (En route pour le milliard; Democratic Republic of the Congo/France/Belgium), in which the Association of Victims of the Six-Day War fight for  recognition of a bloody conflict that took place in the city of Kisangani between two Congolese rebel groups in June 2000.

Other documentaries selected as part of the section, titled Planet Africa 25, are Tommy Oliver’s 40 Years A Prisoner (U.S.), the story of nine people from the Philadelphia-based back-to-nature group MOVE who were convicted of murdering a police officer; and Dawn Porter’s The Way I See It (U.S.), which offers a look behind the scenes of the Barack Obama and Ronald Regan administrations, as seen through the eyes of photographer Pete Souza.

TIFF’s People’s Choice Award celebrates its 43rd year, and audiences will be able to vote online.

Films programmed in this year’s Short Cuts selection are eligible for three jury-selected IMDbPro Awards: Best Film, Best Canadian Film and — new this year — the Share Her Journey Award. IMDbPro will provide each of the three winners with a bursary of CA$10,000 and a one-year membership to IMDbPro.

Finally, the Amplify Voices Awards, presented by Canada Goose, will recognize three of the best feature films from under-represented filmmakers. All feature films in Official Selection by self-identified BIPOC and Canadian filmmakers are eligible, and the three winners will receive $10,000 each.

Winners for all awards will be announced Sept.20.

Realscreen caught up with documentary programmer Thom Powers (pictured) to talk about this year’s selections.

This interview has been edited for brevity and clarity.

How did the process of selecting this year’s films differ in light of the pandemic and the shift to a hybrid digital-physical event?

Thom Powers: The shift to a hybrid event has been a learning curve for everyone in our industry, starting with CPH:DOX jumping out in front of everyone else and kind of leading the way in March when they quickly shifted their festival online.

For documentary makers, they’ve been more quick to adapt to being in an online environment than perhaps some fiction film companies have been. I think that there’s a real excitement on the part of filmmakers like Sonia Kennebeck, who has the film Enemies of the State, to finally reach an audience with her film. The film is an unusual one in our selection. It had originally been slated for the Tribeca Film Festival — it’s certainly the only documentary that had a previous spring slot like that. For a filmmaker, you build up all this anticipation for your film, connecting with an audience, and then when it gets postponed, it’s a very hard thing to adapt to.

What are some of the themes you’re seeing in this year’s documentary selections? How does it differ from last year’s lineup?

TP: There are films that speak very directly to our times and that’s not always the case with documentary films. Sometimes films need more of a gestation period. I remember for instance a couple of years ago we saw some films that were reflective of Donald Trump’s administration, like Errol Morris’s  film about Steve Bannon [American Dharma] and so on. Those took a couple years to process after the events that they were reflecting on. This year, we happen to have more films that feel like they are very much of the moment, whether it’s 76 Days, which speaks to the moment because it was completely made in 2020, or a film like MLK /FBI that is about a historical period of Martin Luther King in the 1960s, but has themes that sadly still resonate today in the relationship between the U.S. government and people calling for greater recognition of civil rights in the United States.

The festival has talked a lot about diversity in recent years, and especially now in light of BLM. What does increased diversity look like for TIFF this year? What voices and perspectives are being brought to the forefront?

TP: As part of our special events, Cameron Bailey selected four films to recognize the anniversary of the Planet Africa section.

I remember that year in 1995, and what was so exciting about that section is that it took films that might otherwise have been marginalized at the festival and gave them their own spotlights. That became one of the most exciting and sought-after sections at the festival.

So I thought it was very meaningful of Cameron this year to shine a light on that history. And he does so by picking four new films this year, three of which are documentaries. One is called 40 Years A Prisoner by the director Tommy Oliver. Another is by a director from Congo, Dieudo Hamadi — who was last at TIFF a few years ago with his film National Diploma — and his new film is called Downstream to Kinshasa, which was also an official selection of Cannes this year. And the third documentary is a new film by Dawn Porter — who earlier this year made the John Lewis documentary [John Lewis: Good Trouble] — called The Way I See It, about Barack Obama’s white house photographer, Pete Souza. It’s going to be released later this fall by Focus Features.

This umbrella of Planet Africa speaks to the festival’s history of shining light on this work, but takes on a greater meaning this year when Black Lives Matter has been one of the most important cultural developments in North America.

Are there any emerging filmmakers in this year’s lineup that you’re excited to introduce?

TP: Egyptian filmmaker Mayye Zayed’s Life Like A Girl. That’s a film that was championed by my colleague Kiva Reardon, who scouts films from the Middle East and Africa.

I think of Dieudo Hamadii in Congo, who’s had films in major festivals before, but is still relatively unknown in North America. And it remains a very rare thing to get a filmmaker based in Congo. So many documentaries that we’ve seen over the years from Africa have been made by people from outside the continent. So those are two examples of films that I’m excited about.

Amongst the Canadian titles, the film No Ordinary Man [directed by Aisling Chin-Yee and Chase Joynt]. It’s a film that has really stayed with me strongly since I saw it earlier this summer. I keep thinking about that one.

What are you most excited for this year?

TP: I’m excited that we get to have a festival that is going to give a platform to these filmmakers and is going to connect audiences to them in a different way. In some ways, we’ll miss things about the regular experience of Toronto, but in some ways I’m excited for viewers across Canada who might not otherwise get to experience the Toronto Film Festival to get to experience it from their homes. I do not take it for granted that we get to have this festival this year. There are many film festivals that could not take place this year.

TIFF as an organization took gigantic financial hits like any arts organization did in 2020, and the ability of Cameron and [co-head] Joana Vicente to lead the organization and make it possible that this festival can happen — new films can be shown with audiences watching them and giving feedback to them –  is really nothing short of a miracle.