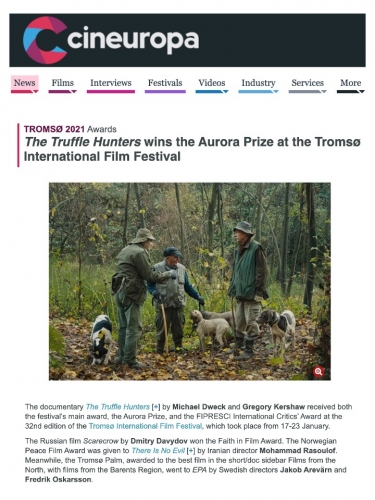 The documentary The Truffle Hunters by Michael Dweck and Gregory Kershaw received both the festival’s main award, the Aurora Prize, and the FIPRESCI International Critics’ Award at the 32nd edition of the Tromsø International Film Festival, which took place from 17-23 January.

The Russian film Scarecrow by Dmitry Davydov won the Faith in Film Award. The Norwegian Peace Film Award was given to There Is No Evil by Iranian director Mohammad Rasoulof. Meanwhile, the Tromsø Palm, awarded to the best film in the short/doc sidebar Films from the North, with films from the Barents Region, went to EPA by Swedish directors Jakob Arevärn and Fredrik Oskarsson.

Three films by Norwegian directors, one sophomore effort and two feature debuts, had their world premieres at the Tromsø-based gathering, the only international film festival in the Arctic Circle.

Ninjababy, directed by Yngvild Sve Flikke, premiered as the festival’s official opening film. The movie had parallel premiere screenings on Tromsø’s digital platform and at the Winter Cinema, located in the city’s main square. An audience of 200, the maximum capacity allowed in accordance with COVID-19 restrictions, watched the outdoor screening. Director Flikke, two of the actors and other crew members were present at the wintry premiere in Tromsø.

Festival and programme director Lisa Hoen said, “Being able to have a physical premiere of our opening film at our Winter Cinema really helped kick off the festival week. The combination of outdoor and digital screenings proved to be a good recipe for getting the festival vibe going in Tromsø, although we had to cancel all of the planned theatre screenings.”

Gritt had its world premiere before it moves on to play in competition at International Film Festival Rotterdam next week. Director Itonje Søjmer Guttormsen’s feature debut tells the story of an artist’s struggle to survive in Oslo, exploring the boundaries of feature film, visual art and documentary.

The third Norwegian flick premiering at TIFF was HIM by first-time feature director Guro Bruusgaard. HIM is made up of three stories about the lives of two men and a boy – Harald, Eirik and Petter – set on one day in Oslo. It presents a penetrating look at expectations, roles and social situations, analysing male roles in contemporary Norway.

Recently implemented restrictions on indoor cinemas meant that the festival had to cancel all of its indoor screenings. “Considering the circumstances, with the current COVID-19 restrictions, we really feel that we still had a proper festival with world premieres, and combining online screenings with outdoor screenings at our Winter Cinema,” sums up Hoen.