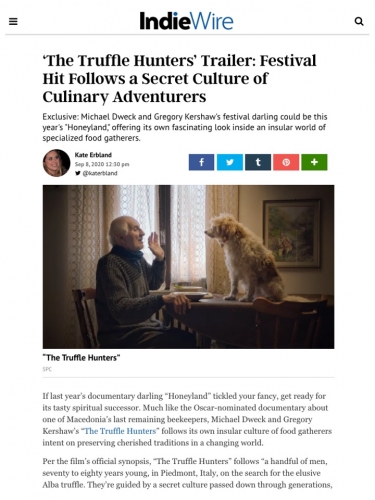 Exclusive: Michael Dweck and Gregory Kershaw's festival darling could be this year's "Honeyland," offering its own fascinating look inside an insular world of specialized food gatherers.

If last year’s documentary darling “Honeyland” tickled your fancy, get ready for its tasty spiritual successor. Much like the Oscar-nominated documentary about one of Macedonia’s last remaining beekeepers, Michael Dweck and Gregory Kershaw’s “The Truffle Hunters” follows its own insular culture of food gatherers intent on preserving cherished traditions in a changing world.

Per the film’s official synopsis, “The Truffle Hunters” follows “a handful of men, seventy to eighty years young, in Piedmont, Italy, on the search for the elusive Alba truffle. They’re guided by a secret culture passed down through generations, as well as by the noses of their cherished and expertly trained dogs. The documentary subtly explores the devastating effects of climate change and deforestation on an age-old tradition through a visually stunning narrative that celebrates life and exalts the human spirit.”

As part of IndieWire’s fall preview package, Eric Kohn wrote that the film tracks “the complex rituals of aging men and their truffle-hunting dogs as the roam the forests of Northern Italy in search of the rare white Alba truffles, for which high-end restaurants will pay a pretty penny. … At the same time, they can’t escape many of the uglier aspects of modern times: Climate change endangers the future of their profession, while the demands of capitalism lead to corruption and fierce competition among their ranks.”

He added, “The filmmakers capture these phenomenon with a blend of lyrical imagery, flashes of deadpan comedy, and a fairy tale setting that brings a whole new layer to the notion of farm to table. Following last year’s ‘Honeyland,’ Dweck and Kershaw’s movie provides another poetic window into solitary lives where resource-gathering isn’t just a job; it’s a fragile way of life that only the cameras can help explain.“

The film premiered at Sundance in January and was later picked as an official selection of both Cannes and Telluride (though those festivals did not host actual events this year, both released lists of the films that would have made the cut). The film will next screen at the Toronto International Film Festival and the New York Film Festival, making it the rare festival darling to make the slates of all five festivals in a single year.

Check out the first trailer for “The Truffle Hunters,” exclusively on IndieWire, below. Sony Pictures Classics will release it in select theaters in New York and Los Angeles on December 25.