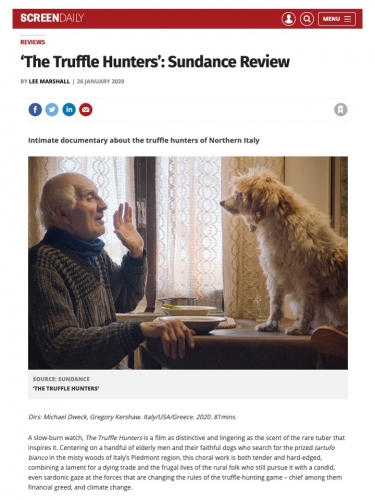 Intimate documentary about the truffle hunters of Northern Italy

A slow-burn watch, The Truffle Hunters is a film as distinctive and lingering as the scent of the rare tuber that inspires it. Centering on a handful of elderly men and their faithful dogs who search for the prized tartufo bianco in the misty woods of Italy’s Piedmont region, this choral work is both tender and hard-edged, combining a lament for a dying trade and the frugal lives of the rural folk who still pursue it with a candid, even sardonic gaze at the forces that are changing the rules of the truffle-hunting game – chief among them financial greed, and climate change.

This Sundance-supported documentary, which includes Luca Guadagnino among its executive producers, is screening in the same World Documentary section that last year launched the Oscar-nominated Honeyland – another eco fable that sees an ancient food-gathering tradition, in symbiosis with nature, threatened by the desire for immediate profit. Composed of a series of fixed-camera vignettes, The Truffle Hunters is a more poised and painterly film than that North Macedonian work, but equally astonishing in the way its subjects become natural actors of their own stories: hours of patient preparation and trust-building are embedded in every second of footage. After Sundance, further festival play will be followed, one hopes, by some form of theatrical release, as this is a beautifully crafted documentary that deserves to be seen on the big screen.

This may be only the second film Michael Dweck and Gregory Kershaw have made together but their previous work, The Last Race (Sundance 2018), on which Dweck took the directing credit, while Kershaw was DoP and co-producer, treads much of the same ground despite taking place at the last surviving stock car racetrack in Long Island. Both films are elegies for a disappearing world, spiked with a critique of a capitalist system that has no respect for tradition or community.

In The Truffle Hunters’ opening autumnal long shot, a steep wooded slope only very gradually reveals a man making slow progress through fallen branches and brambles, though his two black-and-white dogs stand out sharply against the russet and green background. It’s a neat intro to a film that simultaneously celebrates a traditional way of life and decentres the human, dissolving man into nature.

There’s wry humour and tenderness in the portraits of men like Aurelio, an unmarried, childless 84-year-old truffle-hunting maestro who eats out of the same plate as his beloved dog Birba. But we also witness the occasional sharp jab at the money side of what has become a multi-million dollar business. A red velvet cushion on a dias is seen twice before its purpose is revealed – as the plinth for a mega-truffle that will be auctioned off for several thousand euros. A besuited truffle dealer is heard on the phone asking a caller “how many truffles does your president need?”. Less formal trading goes down at night, like drug deals, in dark alleyways or on country roads with the merchandise lit by car headlights.

But the heart of this melancholic documentary is with the men and dogs who spend days and nights in closely guarded forest locations searching for the precious tartufo bianco – which has never, to date, been successfully cultivated. Men like Sergio, a garrulous truffle-hunting ageing rocker who has something of Joe Cocker about him, or the bird-like Carlo, 88, who is forced to climb out of a window to go nocturnal truffle hunting after his stone-faced wife – one of very few women in the film – tells him he’s too old to be wandering about the woods at night (“I like to hear the owls”, is his simple defence). A canine-cam fitted to the heads of some of the truffle dogs we see in the film provides some breathless ‘action sequences’ while driving home the fact that truffles are all about symbiosis and respect – between man and dog, between tree roots and the spores they host, between fellow hunters, whose rare conversations in thick Piedmontese dialect conceal more than they reveal.

What carriesThe Truffle Hunters past some narrative lulls is the way that its carefully composed shots, subtle woodland sound design and quirky use of on and off screen music depict a real world that is also a magical realist elsewhere. The film leads us into a distant, pre-technological past that still exists in the present and could even be a vision of some strange regressive future, where lonely forest men and their faithful truffle dogs are threatened by unknown dog poisoners and the climate change that, year after year, means fewer truffles are found, and more aggressive tactics are used to get to them.