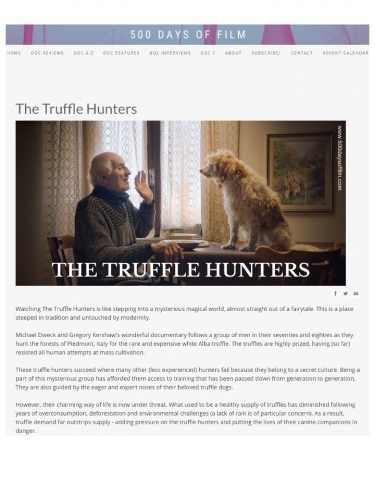 Watching The Truffle Hunters is like stepping into a mysterious magical world, almost straight out of a fairytale. This is a place steeped in tradition and untouched by modernity.

Michael Dweck and Gregory Kershaw's wonderful documentary follows a group of men in their seventies and eighties as they hunt the forests of Piedmont, Italy for the rare and expensive white Alba truffle. The truffles are highly prized, having (so far) resisted all human attempts at mass cultivation.

These truffle hunters succeed where many other (less experienced) hunters fail because they belong to a secret culture. Being a part of this mysterious group has afforded them access to training that has been passed down from generation to generation. They are also guided by the eager and expert noses of their beloved truffle dogs.

However, their charming way of life is now under threat. What used to be a healthy supply of truffles has diminished following years of overconsumption, deforestation and environmental challenges (a lack of rain is of particular concern). As a result, truffle demand far outstrips supply - adding pressure on the truffle hunters and putting the lives of their canine companions in danger.

With no talking heads, narration or other means of documentary exposition, Dweck and Kershaw invite us to observe and experience the truffle hunter's magical world. It is a joy to do so - the filmmakers have created an immersive and beautifully cinematic film, accompanied by a gorgeous score.

While the truffle hunters are guarded and fiercely protective of their craft, they also allow us intimate access to their lives. The trust - on both sides of the camera - is clear. This is a bond that took Dweck and Kershaw a year to establish. Only then were they allowed to join the hunters and capture their mysterious nightly journeys. It is incredible to watch these elderly men move through the challenging terrain of the forest - often walking 20 miles a night.

This would have been a lonely task indeed if not for the dogs. No mere working beasts, these dogs are family. In charming and deeply poignant scenes, the powerful connection between man and dog is revealed. It warms the heart and nourishes the soul to witness such a special relationship.

The relationship between the hunters and their dogs lies at the heart of The Truffle Hunters. In order to gain a greater understanding of the truffle hunt itself, Dweck and Kershaw created a gopro head harness for the dogs to wear. The resulting footage from the dog’s perspective is incredible - full of energy and excitement.

Before long, we become as attached to the truffle dogs as we are invested in the lives of the hunters themselves. It is devastating, therefore, when The Truffle Hunters reveals the potentially deadly risks associated with truffle hunting.

Some hunters leave poisoned meatballs in the forest to sabotage their competition by killing their cherished dogs. This dreadful knowledge imbues the film’s truffle hunting sequences with added tension and dread. The stakes are so high on every expedition - it is enough to make you wonder if the ends justify the means.

The ends are, of course, the truffles. Once they leave the truffle hunter's hands, they go on a rather remarkable journey of their own. Dweck and Kershaw explore the truffle market - the judging, the buying and the selling. This world has its own intriguing traditions and rituals. Valuing a truffle, we discover, involves copious amounts of handling and sniffing (a process that feels rather startling thanks to our recent pandemic experience).

At first glance, the two worlds appear to have little in common. On closer examination, they are united by their passion and appreciation for the truffle. However, the film's heart (and ours) remains in the forests of Piedmont, with the truffle hunters and their dogs. Their love for this timeless way of life is infectious. Beautifully observed and wonderfully immersive, The Truffle Hunters is an absolute joy.