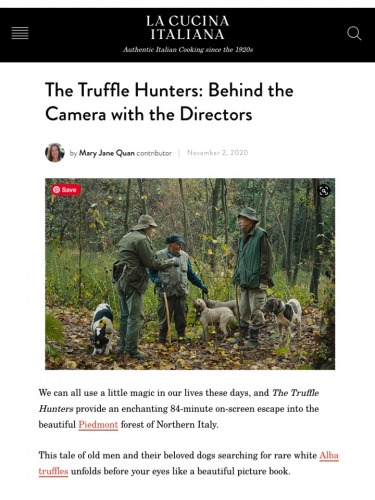 Insights on the anticipated documentary that took three years to complete.

We can all use a little magic in our lives these days, and The Truffle Hunters provide an enchanting 84-minute on-screen escape into the beautiful Piedmont forest of Northern Italy.

This tale of old men and their beloved dogs searching for rare white Alba truffles unfolds before your eyes like a beautiful picture book.

Untouched by technology or smartphones in remote mountain villages, the truffle hunters spend nights deep in the woods with their loyal canines digging for nature's most expensive delicacy. There is a dark side to this secretive culture, underscored by climate change and the dangerous tactics used by competitors vying for the same shrinking truffle supply. Yet the genuine relationship between these men and their dogs persevering together is truly inspiring.

Premiering to rave reviews at The Sundance Film Festival in January, The Truffle Hunters worldwide rights were scooped up by Sony Pictures Classics for reportedly $1.5 million.

The documentary, co-produced by famed director Luca Guadagnino, is scheduled for release in theaters in New York and Los Angeles on December 25th. It will open through January in other regional markets, and later next year, streaming will be available

Co-Directors and Producers Michael Dweck and Gregory Kershaw, during a recent virtual Q&A at the Hamptons International Film Festival, shared details from behind the camera and insight into an unusual passion passed down through four or five generations. It took three years to make the movie after they stumbled into this world while vacationing separately in the region with their families. Determined to meet the authentic truffle hunters and not the "touristy ones," the filmmakers, without any help from the locals who refused to reveal their whereabouts, spent a year tracking down the aging hunters all in their seventies and eighties.

Breaking into this extremely secretive community took a lot of patience and sky miles. Dweck and Kershaw were on a rotating schedule, spending one week at home and three weeks a month with the men of Piedmont meeting in cafes, sharing coffee and wine, learning about their lives, and gaining their trust. "Eventually, we'd start bringing our camera along, and we'd shoot a little bit and show them the kind of film we wanted to make and how we were filming them," said Kershaw. "They see what's going on in the world around them. They see the changes in people's relationship with nature, people's relationship with the community, and they realized they held onto something special. They want the world to see that."

The many months spent together evolved into a special bond between the filmmakers and the hunters. "Eventually, they had forgotten about us. We became almost integrated into their families and their lives," shared Dweck. Working with a translator, the two enjoyed meals at the home of 88-year-old Carlo and his wife Maria, also farmers. Featured in the film is the ongoing dinner conversation with Maria reiterating the consequences of Carlo jumping out his window and walking 15-20 miles in the woods without a flashlight hunting for truffles until sunrise with his sidekick Titina. The filmmakers also brought along their cameras when they accompanied Carlo to the doctor after he fell down a hill, badly injuring his face on a tree branch. The patient, however, was completely unphased. "I don't care. Just fix me up. I'm going truffle hunting tonight."

Dweck and Kershaw were the only two filmings this mystical world, and their gorgeous cinematography was heavily influenced by their surroundings. "We wanted the viewer to feel what we felt when we were filming it and take them through the experience of participating in a storybook world," said Kershaw. "The fog comes up in the morning, and there's just something breathtaking about it." Dweck offered that the truffle hunters' homes' interiors look like a piece of art. "We started to think about the Italian Master Painters. Many times, we'd walk into a home. It was really perfect. The light was beautiful. The walls were painted. The furniture was all crafted beautifully. The way that they chose the things to display in their house is really interesting. What they have they cherish."

In addition to visuals, an equally important part of the film is sound. Together, these elements elevate the sensory experience despite the missing truffle aroma. Dweck and Kershaw hired a sound person specifically to record the unique noises associated with this environment. "Drips of water sound different in Angelo's house in a marble sink than it does outside," said Dweck. "We recorded different types of wind in different valleys, different types of trees. Oak tree wind is different than pine tree wind."

All dogs were equipped with cameras, and their paws and noses were fitted with small microphones fully capturing the canine hunter perspective. At times, it seemed easier working with the four-legged characters than the two-legged ones. Dweck revealed that Carlo moves like "a rabbit," and they would have to hold onto his wrist because he would disappear given the opportunity. He once took off on their sound person as he let go of Carlo's wrist to gather his equipment from the car. "We couldn't find him, and of course, there are no cell phones."

The filmmakers have a few modern surprises planned for their stars. They will reunite with the cast later this month for a screening at the Torino Film Festival.* Dogs received a VIP invite too! Drivers are picking everyone up and chauffeuring the crew to the event. A second screening and celebration for the truffle hunters and their families will be at a 1930's cinema in one of the towns where the film was made. The mayor is coming, and an all-day block party is on the agenda. "It's very sad we haven't been able to do that sooner because of the situation in the world, but this is the moment we've been waiting for. To have them sit through the entire film will be something really special,” said Kershaw.

Unfortunately, one of the truffle hunters, Aurelio, passed away this fall. His great legacy lives on with Birba and his two other dogs. All three are being well cared for by the mayor of his village and are retired from truffle hunting, Aurelio’s specific instructions. “They’re really happy,” reports Dweck. He and Kershaw are in close contact with their new owner, who sends multiple video updates of the dogs every week.

*Due to Covid-19, there may be virtual changes to The Torino Film Festival schedule.