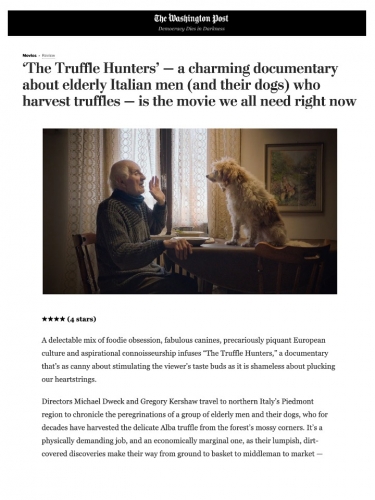 A delectable mix of foodie obsession, fabulous canines, precariously piquant European culture and aspirational connoisseurship infuses “The Truffle Hunters,” a documentary that’s as canny about stimulating the viewer’s taste buds as it is shameless about plucking our heartstrings.

Directors Michael Dweck and Gregory Kershaw travel to northern Italy’s Piedmont region to chronicle the peregrinations of a group of elderly men and their dogs, who for decades have harvested the delicate Alba truffle from the forest’s mossy corners. It’s a physically demanding job, and an economically marginal one, as their lumpish, dirt-covered discoveries make their way from ground to basket to middleman to market — and eventually to the most discerning kitchens in Italy’s finest restaurants — gaining monetary value along the way. The men themselves see little of this largesse; rather their pride comes from the brilliant dogs who sniff out the pungent delicacies in locations only they know. One of the most pressing questions in “The Truffle Hunters” is whether that knowledge — at once arcane and earthy — will be lost forever when this generation dies out, in the absence of young people interested in carrying the tradition forward.

Filmed with rich production values and a keen eye for character, “The Truffle Hunters” recalls the extraordinary 2019 film “Honeyland,” which followed an indomitable Macedonian woman as she tended her beehives in the crags outside her isolated mountain home. Dweck and Kershaw have found similarly charismatic protagonists for their film, especially an aging hunter who, aware of his own mortality, is trying desperately to find a suitable home for the dog that he treats like a member of his own family. At their most inspired, the filmmakers outfit the dogs themselves with harness cameras, allowing the audience to see and feel their excitement and headlong plunge into the woods firsthand. A dizzying shot of a dog shaking itself off is particularly delightful, injecting a welcome note of playfulness to the mission at hand.

That mission becomes more serious — and commodified — as the truffles reach their final destinations on bespoke dinner plates, a commercial trajectory the filmmakers capture with just as much intimacy and savor: Shots of truffle brokers shaving an aromatic tuber over a perfectly cooked egg is the kind of escapist pleasure cinema is meant for. Accompanied by musical samples of opera and Italian pop music, “The Truffle Hunters” is at its best when the camera simply stays with the men and their cherished animals — symbols not just of a sadly disappearing way of life, but of a relationship of mutual care and stewardship that isn’t quaintly sentimental as much as a matter of life or death. This endearing, thoroughly entertaining movie might be what we all need right now: An invitation to stop and smell the roses — or, if you’re lucky, their far less showy fungal cousins.

PG-13. At area theaters. Contains some strong language. In Italian with subtitles. 84 minutes.