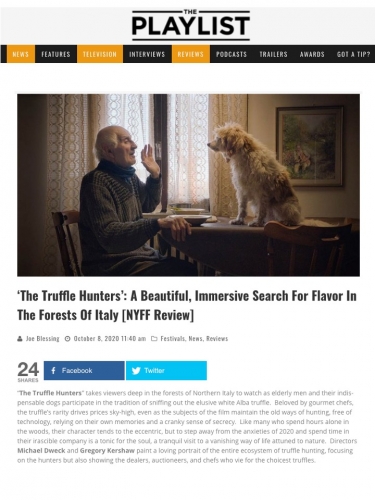 “The Truffle Hunters” takes viewers deep in the forests of Northern Italy to watch as elderly men and their indispensable dogs participate in the tradition of sniffing out the elusive white Alba truffle.  Beloved by gourmet chefs, the truffle’s rarity drives prices sky-high, even as the subjects of the film maintain the old ways of hunting, free of technology, relying on their own memories and a cranky sense of secrecy.  Like many who spend hours alone in the woods, their character tends to the eccentric, but to step away from the anxieties of 2020 and spend time in their irascible company is a tonic for the soul, a tranquil visit to a vanishing way of life attuned to nature.  Directors Michael Dweck and Gregory Kershaw paint a loving portrait of the entire ecosystem of truffle hunting, focusing on the hunters but also showing the dealers, auctioneers, and chefs who vie for the choicest truffles.

Dweck and Kershaw never intrude on the action to editorialize or add information, but rather use a restrained, fly-on-the-wall approach to let their cantankerous subjects, and their beautiful natural surroundings, speak for themselves.  This makes for a wonderfully immersive experience, as almost all scenes rely on just one camera set-up, letting the action wash across the fixed frame at its own unhurried pace.  A notable exception, however, occurs in scenes where the camera is attached to the head of a dog, capturing a whirling dervish perspective as the dog romps across the forest floor, the all-important snout working in overdrive at the bottom of the frame.

“The Truffle Hunters” is an especially beautiful film for dog-lovers, as the hunters cherish the dogs as both breadwinners and life partners, sharing meals and even baths with their canine companions.  One hunter muses how he doesn’t need a wife because of his beloved dog Birba, but in a different scene considers finding a wife (a “wild woman” who can put up with him) solely so he can have someone to look after Birba when he’s passed.  We only meet one married hunter, whose wife tells him repeatedly that he’s too old (at 87) to go hunting at night.  He nods along but later slips out the window and leaves with his dog Titina.

One of the most memorable hunters met is actually an ex-hunter, who, exasperated by the underhanded tricks of the competition, has given up the pastime, yet still feels strongly enough about it that we see him at a typewriter, composing a manifesto on what has gone wrong in truffle hunting.  The short answer is that high prices have turned hunting into a cutthroat business; the most savage tactic is poisoning the dogs of other hunters, the mere prospect of which drives the hunters to despair.

Despite this trace of darkness, “The Truffle Hunters” is a charming, life-affirming film, a look at an enduring folkway that brings fun and flavor to Italians every year.  Dweck and Kershaw don’t need to say a word explaining the appeal of hunting, it’s easily apparent as the faces of old men turn young with excitement as they race after their dogs into the forest for one more hunt.  [A]