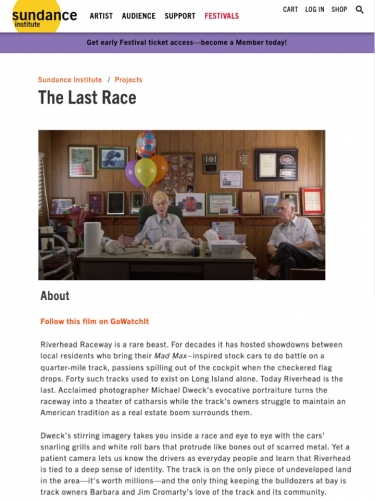 Riverhead Raceway is a rare beast. For decades it has hosted showdowns between local residents who bring their Mad Max–inspired stock cars to do battle on a quarter-mile track, passions spilling out of the cockpit when the checkered flag drops. Forty such tracks used to exist on Long Island alone. Today Riverhead is the last. Acclaimed photographer Michael Dweck’s evocative portraiture turns the raceway into a theater of catharsis while the track’s owners struggle to maintain an American tradition as a real estate boom surrounds them.

Dweck’s stirring imagery takes you inside a race and eye to eye with the cars’ snarling grills and white roll bars that protrude like bones out of scarred metal. Yet a patient camera lets us know the drivers as everyday people and learn that Riverhead is tied to a deep sense of identity. The track is on the only piece of undeveloped land in the area—it's worth millions—and the only thing keeping the bulldozers at bay is track owners Barbara and Jim Cromarty’s love of the track and its community.

Michael Dweck is an American visual artist and filmmaker best recognized for his narrative photography. Dweck artistically investigates the ongoing struggles between identity and adaptation found within endangered societal enclaves. Dweck's works The End: Montauk, N.Y. (2004), Mermaids (2009), and Habana Libre (2012) have been featured in solo and group exhibitions at museums and galleries worldwide and are part of prestigious international art collections. The Last Race is Dweck's feature film debut.