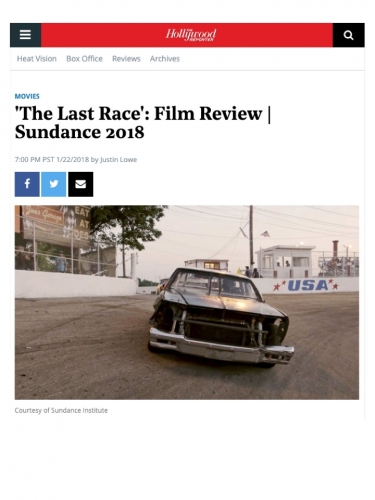 The all-American sport of stock car racing conjures images of super-charged vehicles tearing around a banked track at teeth-rattling speed, surrounded by grandstands packed with cheering fans. Those kinds of images, largely inspired by the NASCAR competition circuit, are a far cry from the world of grassroots racing, a passionate hobby for legions of amateur enthusiasts.

Despite the sport’s association with the southern U.S., stock car racing originated on New York’s Long Island, where filmmaker Michael Dweck grew up not far from a local track that he frequented to watch weekend races with his family. Those childhood experiences profitably inform his debut documentary, a finely observed, heartfelt tribute to the sport and its blue-collar origins.

Unconventional in style and contemplative in tone, The Last Race represents more of a living document of a dwindling American subculture than a typical sports documentary. Although it may initially struggle to find its audience, the film will likely endure as a testament to the resilience of a community dedicated to long-established racing traditions.

The Riverhead Raceway is the last track remaining from a circuit of more than 40 that formerly dotted Long Island. Owned and operated by octogenarians Barbara and Jim Cromarty, Riverhead sponsors weekend races on a quarter-mile track throughout the summer season for amateur drivers competing for modest winnings and trophies.

The cars are modified coupes and sedans, reinforced with crash protection and stripped of extraneous equipment to take advantage of souped-up engines that improve speed and handling. Race heats take place during a three-hour timeframe, consisting of approximately 20 cars making 20 laps at high speed.

The Cromartys have run Riverhead since 1977 and in the years since, all of the other racetracks have been closed, sold and paved over for shopping malls, big-box stores and housing tracts to accommodate Long Island’s burgeoning population. As development has driven up real estate prices, the Riverhead property has climbed to over $10 million in value, offering the Cromartys a lucrative retirement alternative.

Shot over the summer racing season, the film grew out of Dweck’s project photographing at Riverhead starting nearly a decade earlier. His familiarity with Long Island racing culture and frequent presence at the track helped the filmmakers develop an easy rapport with the raceway community. Between races, the drivers work regular jobs as contractors, fishermen and restaurateurs, spending their weekends laboring over their cars or scavenging replacement parts.

The resulting rebuilds vary significantly in style and quality, with some appearing nearly NASCAR-ready and others tending more toward Mad Max-type innovation. Regardless of their cars’ appearance, these drivers are unfailingly proud of their hand-built, assiduously maintained vehicles. Like protagonists in a Bruce Springsteen ballad, they head out to the racetrack chasing glory, dreaming of becoming heroes for a day.

Raceway owners Jim and Barbara Cromarty offer a more philosophical counterpoint to the hectic atmosphere surrounding the weekend races. After decades of running Riverhead, they’re well aware of the property’s estimated worth, but continue holding out for the love of the sport and the tight-knit community that’s developed along with the racetrack. “It’s touched lives in a very strong way, in a way that you just don’t get anywhere else,” observes Barbara. “This is really what it’s all about, this intimate emotional interplay between human beings.”

Even though they’re dependent on walkers and their signature golf cart to get around the property, the Cromartys are still in their office running the show every weekend throughout the season. Although health concerns are forcing them to reconsider their options, they still don’t want to see Riverhead “bulldozed over for another shopping center,” says Barbara.

With The Last Race, Dweck expands on his body of narrative photography topics by documenting the disappearing subculture of grassroots racing, as the Cromartys' track confronts closure in the face of inexorable property development. Dweck and cinematographer-producer Gregory Kershaw shoot Riverhead and the racers from almost every conceivable angle, placing cameras at a variety of positions and elevations along the racecourse. Compact equipment mounted on the cars captures the action on the track as cars jostle and swerve for position, as well as the drivers’ reactions, with arresting immediacy.

These racing sequences in particular create an impressionistic, hypnotic effect that seems to be searching for some kind of emotional truth, rather than attempting a literal representation of the race competition. This film essay approach provides an evocative format for Dweck to explore themes of masculine identity and class representation that underlie stock car racing, as well as a method to contextualize the specific threats to Riverhead’s continued existence.

Whether Riverhead Raceway survives despite the challenges it faces, The Last Race will continue to celebrate the devoted race teams and fans that have made it an irreplaceable Long Island tradition.