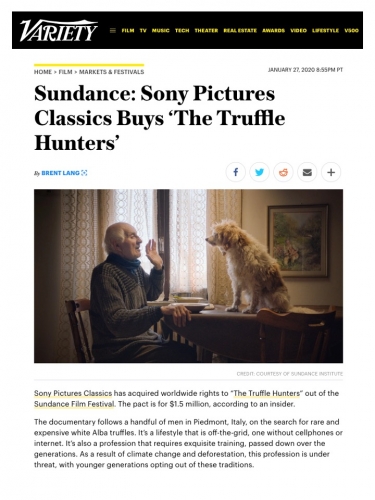 Sony Pictures Classics has acquired worldwide rights to “The Truffle Hunters” out of the Sundance Film Festival. The pact is for $1.5 million, according to an insider.

The documentary follows a handful of men in Piedmont, Italy, on the search for rare and expensive white Alba truffles. It’s a lifestyle that is off-the-grid, one without cellphones or internet. It’s also a profession that requires exquisite training, passed down over the generations. As a result of climate change and deforestation, this profession is under threat, with younger generations opting out of these traditions.

“This is one of the freshest, most beautiful films ever. It will be embraced by audiences the world over,” said Sony Pictures Classics in a statement. “Thank you to the filmmakers for making us a partner in what promises to be a grand adventure. Really. This major artistic achievement will make the world smile.”

This marks Sony Pictures Classics’ second acquisition out of this year’s Sundance Film Festival. It previously acquired “The Father,” a family drama with Anthony Hopkins and Olivia Colman that generated awards buzz when it debuted on Monday.

“The Truffle Hunters” was directed by Michael Dweck and Gregory Kershaw. The film earned critical praise. In a positive review for Variety, Tomris Laffly called the film “a scrumptious, melancholic cinematic journey into the storied world of truffle hunters in Northern Italy that serenades the eyes and appeals to sophisticated taste buds.”