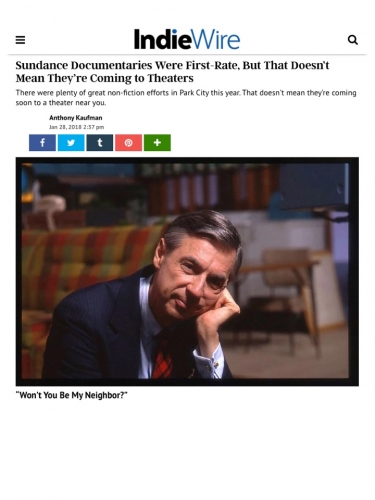 There were plenty of great non-fiction efforts in Park City this year. That doesn't mean they're coming soon to a theater near you.

What makes a documentary suited to a theatrical release—and all the expense and effort associated with it? And when are they more appropriate for smaller screens? After several straight months of disappointing box-office sales for most nonfiction films, including several hits from last year’s Sundance, this question would seem to be a pressing one out of this year’s film festival. But the answer—as evidenced by the few distribution deals that closed before and during Sundance, those that are still pending, and those that should be—isn’t so easy to nail down, though some combination of topicality, celebrity or artistry certainly comes into play.

Before Sundance kicked off, Oscar-winner Morgan Neville’s Mister Rogers film “Won’t You Be My Neighbor?” was one of the few documentaries to already have a major theatrical distributor (Focus Features) behind it—and its rapturous Park City unveiling appeared to justify it. Unlike its description might suggest, the film transcends the standard bio-pic format to become a highly resonant and timely look at America’s culture wars. Who would have thought that a Republican cardigan-wearing Presbyterian-trained minister with a message of tolerance and civility could be our best response to the current President? Set to ignite political debate at the same time as it soothes liberal arthouse audiences, it was one of the festival’s most uniformly embraced docs.

Magnolia Pictures’ mid-week acquisition of “RBG,” a lively, though conventional portrait about Supreme Court Justice Ruth Bader Ginsburg, is also instructive. While the film offers a straightforward and hagiographic account of the judge’s rise through the ranks of America’s patriarchal institutions and her close marriage with Martin Ginsburg, there’s nothing particularly captivating here—except for the fact that it’s a rousing activist cry for one of the year’s most significant issues: Women’s rights. If Magnolia’s release of “I Am Not Your Negro” was able to capture last year’s “Get Out”/Black Lives Matter zeitgeist, “RBG” will only become more relevant as Trump continues to attack her and search for her replacement—a fact that makes this documentary one of the festival’s most timely.

For a more punk-rock feminist portrait, there was the Joan Jett film “Bad Reputation,” another chronological survey of a life’s upswing within a male-dominated system. Though likely to play better to the musician’s fan base, the rock-doc also taps directly into the contemporary women’s power movement, showing the life of Jett as a female trailblazer who didn’t give a damn and paved the way for women in the music industry.

There were many—probably too many—other profiles of famous people, including “Jane Fonda in Five Acts” and “Robin Williams: Come Inside My Head,” both set for HBO broadcast, as well as traditional portraits of director Hal Ashby (“Hal”)) and artist Yayoi Kusama (“Kusama – Infinity”). What makes these nonfiction films more befitting a night out at the movies versus cozying up with them on the couch?

Among the best of the HBO docs, “King in the Wilderness,” a compelling and astutely constructed archival-driven look at the last contentious years in the life of Martin Luther King, Jr., stands out precisely because it’s not biographical tribute, but a focused chronicle of a combustible time when the stakes reached a fever pitch for the Civil Rights leader. But while “King in the Wilderness” is riveting and relevant to the persistent struggle for racial equality, its historical framework may limit its theatrical prospects.

On the other hand, “Three Identical Strangers,” purchased by Neon mid-week, reflects what it takes to make a film break out without celebrities or timely issues. Reminiscent of last year’s Sundance true-conspiracy docs “Tickled” and “Icarus,” “Strangers” has that WTF-mystique built into its sensationalistic narrative of triplets separated at birth who only learned of each other when they were 19-years-old. But what begins buoyantly, full of fun ‘70s reenactments and archival footage of their brief time in the limelight (they appeared briefly with Madonna in “Desperately Seeking Susan”), eventually turns darker and, as a result, becomes a more enriching and emotional experience about fathers and sons, nature versus nurture.

This year’s U.S. Documentary Competition, as always, had its fair share of straight-up advocacy docs (“Inventing Tomorrow,” “Dark Money,” “The Devil We Know,” “Kailash”), all of which will find their niche audiences. But the future of the section’s most cinematic docs is uncertain: Robert Greene’s “Bisbee ‘17,” an elegiac and captivating journey into American history, identity, and division, as enacted by a small Arizona town; RaMell Ross’s “Hale County, This Morning, This Evening,” a strikingly photographed, impressionistic study of black rural Southern life; and Michael Dweck’s “The Last Race,” an operatic Gates of Heaven-inspired look at stock-car racing and its fading Long Island community.

If any of this year’s non-fiction achievements should be experienced on the big screen, it’s these. You can also add in Sandi Tan’s World Documentary Competition title “Shirkers,” a film critic’s darling, which features cineastes and lots of classic film clips, as it follows the filmmaker’s quest to uncover the truth behind her mentor, and the unfinished independent movie he stole from her years before. But it’s unclear if theatrical distributors will take a risk on this type of film. Is aesthetic creativity and mastery enough to propel it into cinemas?

There were other competition docs that shrewdly combine sensitive observational filmmaking with larger social agendas, such as the excellent “On Her Shoulders,” “Crime + Punishment,” and “Minding the Gap.” In each case, the filmmaker takes a central issue and deepens it with penetrating explorations of character. In “On Her Shoulders,” director Alexandria Bombach tracks ISIS victim-turned-activist Nadia Murad in her campaign to raise awareness for her ethnic group’s devastation, but the film’s quieter in-between moments and intimate portraiture powerfully expresses the painful slog and personal psychological toll of making social change.

Similarly, Stephen Maing’s “Crime + Punishment” is an essential investigative documentary about corruption in the NYPD department, whose illegal quota policies continue to disrupt communities of color, but the film comes alive with its empathic look at its whistleblowing cops, particularly Edwin Raymond, a well-spoken officer who eloquently speaks truth to power. Bing Liu’s “Minding the Gap” also skillfully balances social issues with compelling characters as it follows several years in the lives of a group of skateboarding male friends in the Midwest as they grapple with the legacy of family abuse. In previous years, the strength of content in these three films may have been enough to push them into wider distribution, but nowadays, it may not be enough.

But maybe the definition of “theatrical” matters less these days anyway. Consider that two of the biggest nonfiction productions at Sundance, hailing from Oscar-nominated filmmakers Matthew Heineman and Steve James, respectively, are TV projects. Heineman’s multi-faceted expose of the opioid crisis through the eyes of the growers, addicts, cartel bosses and law enforcement officials will premiere on Showtime on February 2. And in the largest documentary deal of Sundance, Starz reportedly paid $5 million to acquire James’ 10-part series “America to Me,” a binge-worthy longitudinal study of race—and racial disparities—in education as seen through the microcosm of one large suburban Chicago high school, and its cast of eminently engaging students and teachers. If Heineman and James don’t need theaters, maybe the rest of Sundance’s doc-makers don’t, either.