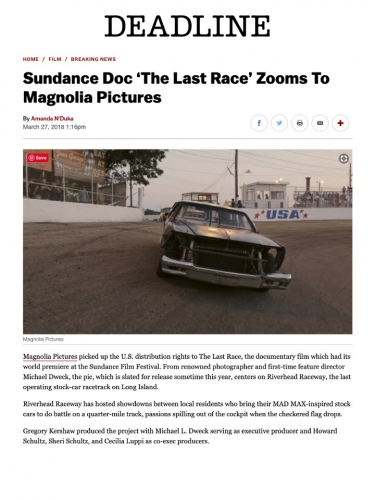 Magnolia Pictures picked up the U.S. distribution rights to The Last Race, the documentary film which had its world premiere at the Sundance Film Festival. From renowned photographer and first-time feature director Michael Dweck, the pic, which is slated for release sometime this year, centers on Riverhead Raceway, the last operating stock-car racetrack on Long Island.

Riverhead Raceway has hosted showdowns between local residents who bring their MAD MAX-inspired stock cars to do battle on a quarter-mile track, passions spilling out of the cockpit when the checkered flag drops.

The deal was negotiated by Magnolia’s Dori Begley and John Von Thaden, with Submarine on behalf of the filmmakers.