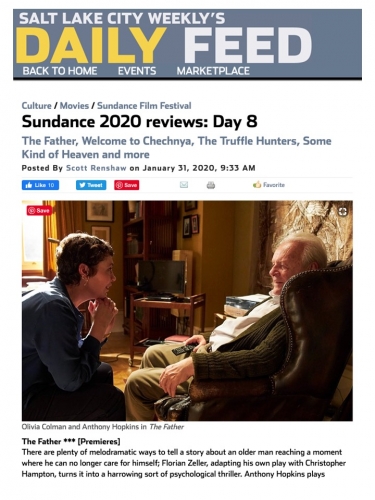 The Father, Welcome to Chechnya, The Truffle Hunters, Some Kind of Heaven and more
By Scott Renshaw

The Father *** [Premieres]
There are plenty of melodramatic ways to tell a story about an older man reaching a moment where he can no longer care for himself; Florian Zeller, adapting his own play with Christopher Hampton, turns it into a harrowing sort of psychological thriller. Anthony Hopkins plays Anthony, an octogenarian Londoner living alone, with his daughter Anne (Olivia Colman) trying to attend to his care as he chases away a succession of caregivers. Or perhaps he’s already living with Anne and her husband (Rufus Sewell). Or perhaps the woman he’s living with isn’t actually Anne. Zeller repeatedly folds his narrative back in on itself and shifts the roles his actors are playing, conveying the tumult inside a mind that has begun to lose its sense of time and identity without (generally) turning the story into a puzzle box that needs to be solved. Hopkins and Colman are both superb, with Colman in some ways playing the trickier role, since “Anne” exists entirely through the disoriented way Anthony sees her. The climax stumbles a bit in overly literalizing the idea of elders becoming infantilized, but The Father mostly provides a bracing POV of how terrifying it must be to have every foundation you think you understand begin to slip away. (Scott Renshaw)

The Truffle Hunters ***1/2 [Word Documentary]
Despite having one of the world’s most-expensive foods in its title, The Truffle Hunters eschews the “food porn” route and doesn’t give you much in the way of truffle-ology; not until the last several minutes do you actually see a truffle served, and it’s to people very unlike the ones we’ve been watching. But this is a film about production, and all that gets poured into it, not consumption. What makes it a lovely and charming little bon-bon of a documentary is the resulting commitment to the lives of these grizzled men in northern Italy, where the white Alba truffle can be discovered (it can’t be cultivated), to the dogs that find them, and to the rarity of their skills. “I wouldn’t even tell my son” about the best hunting grounds, one man declares. The opening overhead drone shot of a man and two dogs hunting for truffles show directors Michael Dweck and Gregory Kershaw wanting to present the material cinematically. The images have an Old Master painterly quality to them and the movie’s most unforgettable moment involves a dog-cam—not because it’s doing the obvious dog’s-eye view, but because the cutting pattern to the punchline is perfect. As is the last shot, a joke that’s actually about work as the stuff of being. (Victor J. Morton)

Welcome to Chechnya *** [U.S. Documentary]
I have to acknowledge though that this is a subject matter grade. Had movies existed in the 1850s, this is what a documentary about the Underground Railroad would have looked like, but it feels a little rote. It centers on a small group of Russian activists who help smuggle gay men and lesbians out of Chechnya, run by strongman and Putin acolyte Ramzan Kadyrov. Over the past few years, the republic has engaged in anti-gay purge, some of the attacks official and some relying on family honor among the mostly-Muslim populace. (The film starts with a lesbian whose uncle found out, and demands sex from her or he’ll tell her father, a high Chechen government official.) There are scenes that are hard to watch, usually “video intercepted by LGBT activists.” These include gay bashings and a rape, and my Park City audience let out an audible gasp right as a video cut away from a stoning. Much of the present-tense footage concerns efforts to smuggle Chechens (and some other Russian gays) around safe houses in Moscow and eventually abroad. Unfortunately, the considerable inherent human interest aside, the film neither ever really develops into great set pieces nor goes anywhere terribly surprising. But a journalistic work on a great subject is still a great subject. (VJM)

Some Kind of Heaven **** [NEXT]
Director Lance Oppenheim’s documentary dives into the world of The Villages—a massive planned retirement community of 130,000 residents in Central Florida—in a way that feels completely counter-intuitive, and turns out to be utterly fascinating. Though he includes scenes that show us the wide range of clubs and social activities, and a bit of history about The Villages’ creation, he chooses to focus on four characters: married couple Anne and Reggie; widowed Barbara; and for-all-practical-purposes homeless bachelor Dennis. Every one of these characters turn out to be fascinating, in completely unique ways; there’s compassion for Barbara’s quest to find companionship, and bemusement at the strain on Anne and Reggie’s marriage caused by his (to put it generously) eccentric behavior. What Oppenheim reveals isn’t some dark underbelly of a place that sells itself as being an idealized locale for twilight years, but simply the reality that life’s complications don’t end at retirement. And he does so with beautiful filmmaking bolstered by David Bolen’s cinematography, the compositions and editing capturing this place with remarkable specificity. Conveying deep compassion for the distinctive challenges facing people at this time of life—from financial insecurity to loneliness—Some Kind of Heaven offers a rich portrait of people in their golden years who don’t always feel so golden. (SR)

The Mole Agent *** [World Documentary]
I might have liked this movie even more if I weren’t spending much of it not trusting what I saw. It opens with a private investigator’s newspaper ad soliciting someone in his 80s to go into a nursing home and investigate allegations of abuse being brought by a resident’s child. At the beginning and for major stretches, Mole Agent plays more like a comedy than an undercover expose, as Sergio, the man hired, is a bit technologically challenged; he’s also a debonair “character” and a hit with the ladies, one of whom even broaches marriage. The other patients become characters and, inevitably—given their ages—birthday celebrations mix with a funeral. Sergio wears (and inevitably breaks) a pair of hidden-camera glasses, some footage from which we see. But some of that footage is intercut with the same moments in professional-looking widescreen images. So … who took it? Are we supposed to believe a nursing home that commits abuse would give a documentary crew free run? If it did … what is Sergio investigating? Thankfully, we get a satisfactory ending as Sergio concludes the patients are suffering mostly from isolation and lack of visits from children and grandchildren. Which they can bear by telling themselves the kids have lives and families now—but only to a point. (VJM)