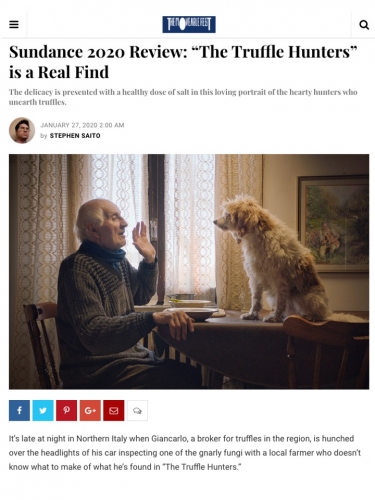 The delicacy is presented with a healthy dose of salt in this loving portrait of the hearty hunters who unearth truffles.

It’s late at night in Northern Italy when Giancarlo, a broker for truffles in the region, is hunched over the headlights of his car inspecting one of the gnarly fungi with a local farmer who doesn’t know what to make of what he’s found in “The Truffle Hunters.”

“In the end, you sell the aroma of truffles,” Giancarlo tells the man, who laments he no longer travels to a farmer’s market to know the fair value of what he’s holding before being offered 500 Euros for 350 grams.

It isn’t the only late night maneuvering you see from Giancarlo, who can feel free to put his own price on something as ephemeral as “aroma” and turn around and sell the truffles quite literally in a back alley deal with a chef eager to shave some over a plate of pasta or negotiate a deal overseas to royalty, making up to 4500 per kilo for his troubles. He’s inherited his father’s business, surveying the countryside for the finest truffles to sell abroad, but while the appetite for the delicacy has grown exponentially since his dad’s time, the distaste has grown amongst the oldest of the truffle hunters who have seen the area flooded with amateurs with little regard for the land, hoping to make a quick buck, and don’t trust Giancarlo to give them a fair shake no matter how many times he evokes his father by saying “you know me.”

The fragmentation of this once copacetic community would appear to be reflected in the film’s presentation, which jumps between the individual truffle hunters going about their daily lives, mostly with their days of strenuous work behind them. Visits by Giancarlo connect them since the demand from Russia and America requires him to seek out every possible avenue to obtain them, but reactions to him range from mild indifference of some who aren’t moved by his flattery, to outright hatred, as one plans to write a book about how greed has ruined things. Interspersed between these glimpses of quotidian routine are a trip to a truffle auction in the city where the region’s discoveries are offered up like baubles, regally sitting on red pillows, yet co-directors Michael Dweck and Gregory Kershaw take great pains to showcase their humble subjects just as nobly, lit like Vermeer paintings in gorgeously composed frames.

Any fear that this might be pretentious should be erased by the distinctly Italian brio inherent to the film’s style and sense of humor that the two American filmmakers are able to summon, finding wonderfully playful storylines in the relationships between the truffle hunters and their dogs, trusted for their nose but as the years go on, more so for their companionship, and the running predicament of Carlo, an 87-year-old who has trouble abiding by his wife’s desire that he stop looking for truffles at night. By the time “Truffle Hunters” ends, you understand what keeps luring him back, though that’s also true of those that have turned away from the practice when the belief prevails that you can’t put a price on what they do, nor should you. The region is rich enough as it is without any money coming into the equation.