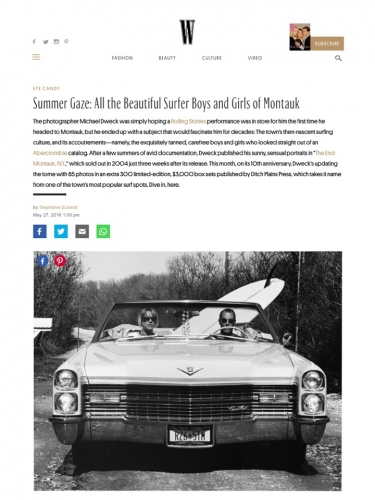 The photographer Michael Dweck was simply hoping a Rolling Stones performance was in store for him the first time he headed to Montauk, but he ended up with a subject that would fascinate him for decades: The town's then-nascent surfing culture, and its accoutrements—namely, the exquisitely tanned, carefree boys and girls who looked straight out of an Abercrombie catalog. After a few summers of avid documentation, Dweck published his sunny, sensual portraits in "The End: Montauk, N.Y.," which sold out in 2004 just three weeks after its release. This month, on its 10th anniversary, Dweck's updating the tome with 85 photos in an extra 300 limited-edition, $3,000 box sets published by Ditch Plains Press, which takes it name from one of the town's most popular surf spots. Dive in, here.