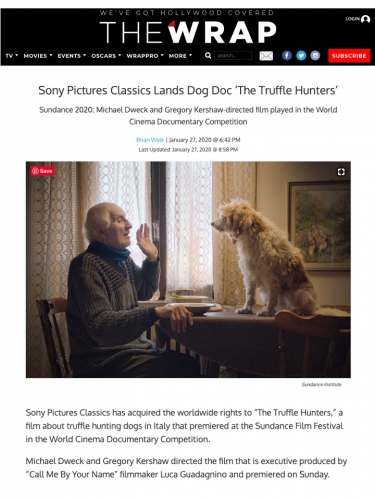 Sony Pictures Classics has acquired the worldwide rights to “The Truffle Hunters,” a film about truffle hunting dogs in Italy that premiered at the Sundance Film Festival in the World Cinema Documentary Competition.

Michael Dweck and Gregory Kershaw directed the film that is executive produced by “Call Me By Your Name” filmmaker Luca Guadagnino and premiered on Sunday.

“The Truffle Hunters” is set deep in the forests of Northern Italy where a prized white Alba truffle can be found and is desired by the richest people in the world. The truffle can’t be cultivated or found except by a tiny circle of canines and their elderly Italian companions who only hunt for the truffle at night as to not give away their secrets and leave clues for others on how to find them.

“This is one of the freshest, most beautiful films ever. It will be embraced by audiences the world over,” Sony Pictures Classics said in a statement Monday. “Thank you to the filmmakers for making us a partner in what promises to be a grand adventure. Really. This major artistic achievement will make the world smile.”

Submarine brokered the deal, which also handled the sale of the documentary “Boys State” to Apple earlier on Monday.

Sony Pictures Classics ahead of the festival purchased “The Father,” from director Florian Zeller and starring Anthony Hopkins and Olivia Colman in a film based on Zeller’s own award-winning stage play.

Deadline first reported the news of the sale.