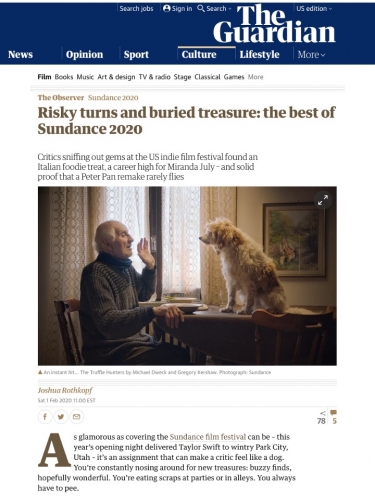 Critics sniffing out gems at the US indie film festival found an Italian foodie treat, a career high for Miranda July – and solid proof that a Peter Pan remake rarely flies

As glamorous as covering the Sundance film festival can be – this year’s opening night delivered Taylor Swift to wintry Park City, Utah – it’s an assignment that can make a critic feel like a dog. You’re constantly nosing around for new treasures: buzzy finds, hopefully wonderful. You’re eating scraps at parties or in alleys. You always have to pee.

So it made perfect sense when, early in the week, we found The Truffle Hunters – the most apt movie that will ever emerge from a film festival, anywhere. It’s an exquisite, frequently funny documentary about an Italian trade in its twilight phase: the woodsy pursuit of ultra-expensive white Alba truffles undertaken by elderly men and their canine companions (who do all the work). We come to know and love these dogs, with names like Birba and Titina, blessed by sombre priests who pray for a lucky season, and doted on like gifted children. And while co-directors Michael Dweck and Gregory Kershaw (of 2018’s gorgeous The Last Race) strap a wearable camera on a pooch’s head for some killer footage, their perspective is usually one of elegant distance, all the better to tease out notes of darkening fortune and human-animal kinship. An instant foodie hit (Sony Picture Classics snapped it up), it was the closest thing to a consensus favourite.

If only the truffle hunt proved as easy for us critics during the rest of the fest. In recent years, Sundance has proved to be a reliable launch pad for an extraordinary amount of best-of-year work: everything from dramatic powerhouses such as Call Me By Your Name and The Souvenir to head-spinning horror sensations Get Out and Hereditary. Now, as seen with the slick Swift profile Miss Americana, Sundance’s opening-night selection can be streaming on Netflix before the festival even ends. Every annual film showcase from Cannes downwards is wrestling with these questions of exclusivity and access – Sundance more than most, with its reputation as keeper of the American indie flame.

To its programmers’ credit, the festival seems to have responded by doubling down on riskiness. If you were willing to put in the work, there was much value to be found in 2020’s lineup, which yielded several small-scale triumphs, intimate in scope but deep in feeling and spirit. Female directors may be exotic creatures to Bafta and Oscar voters, but at Sundance they represented a robust 46% of the titles in competition.

Moreover, the female-driven films were far and away superior. Hitting a career high, Miranda July (Me and You and Everyone We Know) unleashed her magnificently weird heist comedy Kajillionare, a cross between Wes Anderson and Michael Mann, starring Richard Jenkins, Debra Winger and a heartbreakingly good Evan Rachel Wood. They play a long-haired family of Los Angeles grifters desperate to scheme their way through another day of existence; all of them are unprepared for their youngest member’s romantic awakening.

Cameraperson documentarian Kirsten Johnson gave us Dick Johnson Is Dead, a playfully profound, Agnès Varda-esque collaboration with her octogenarian dad, shot while he was slipping into dementia. (In the wake of the shocking mid-festival news about Kobe Bryant and his daughter, Johnson’s film – a lingering goodbye – felt like a gift.)

And wrecked audiences leapt to their feet in praise after seeing Eliza Hittman’s ruinous Never Rarely Sometimes Always, feminist in subject matter and execution. An unflinching depiction of a Pennsylvania teen’s secret quest to get an abortion, the drama from the writer-director of 2017’s Beach Rats feels like a sister to the 2007 Romanian classic 4 Months, 3 Weeks & 2 Days – with the extra frisson that this particular journey to the grungy transit hubs of New York seems even more harrowing than living in a communist country in the 1980s. There’s a soft, anonymous, even awkward quality to the actors Hittman prefers to cast; Never’s Sidney Flanigan and Talia Ryder (the latter playing a supportive cousin who comes along) could be any random kids, adding to the universality of women’s rights under siege.

Sundance’s most fearless titles unspooled to the droning backdrop of the Trump impeachment hearings, increasingly an exercise in fact-avoidance. In contrast, film-makers pursued their truths to the bitter end: Welcome to Chechnya, a galvanising documentary about the smuggling of LGBTQ people out of a country that criminalises them, was the festival’s most rousing and essential film. Director David France, already famous for his 2012 history of the Aids activist group Act Up in How to Survive a Plague, summons the nervous energy of a peak Bourne thriller. (Some escapees appeared at post-screening Q&As, bold acts of public defiance.) Crip Camp, about the 1970s rise of the disability-rights movement, had a sun-dappled, utopian heart. Even The Go-Go’s – you knew a movie called The Go-Go’s was bound to arrive one day – rhapsodised about the punk movement that nourished and radicalised the 1980s all-female band (regardless of their inability to play instruments).

The films weren’t all great. Benh Zeitlin, the wunderkind whose 2012 Beasts of the Southern Wild soared from Sundance all the way to the Academy Awards, arrived with his aggressively “magical” Wendy, proving once again that adapting Peter Pan is a fool’s errand for talented up-and-comers and Hollywood titans alike. Filled to the brim with screechy children jumping off cliffs, the movie is larded with dialogue that sounds like adolescent self-therapy: doubt yourself and you’re old already. Never slow down. Never think twice. And Mudbound’s Dee Rees, another Sundance success story, floundered with her convoluted The Last Thing He Wanted (based on Joan Didion’s 1996 spy novel), starring a stalwart Anne Hathaway as a chain-smoking reporter trapped between Contra arms deals and bad sex with Ben Affleck.

Those two selections seemed loyal to a fault, whereas the actual spirit of today’s Sundance is revisionary. It was only three years ago that Harvey Weinstein mingled among the pink hats at a Sundance women’s march. The seismic impact of #MeToo and Time’s Up continues to be felt, evidenced by the well-received On the Record, a lucid yet enraged documentary by Kirby Dick and Amy Ziering that unpacks the rape accusations lodged against Def Jam mogul Russell Simmons. “I didn’t want to let the culture down,” says conflicted former A&R executive Drew Dixon – herself allegedly a victim of Simmons’s predations while still viewing him as a hero to the black community – in one of the most complex moments of shame, regret and fury at the festival.

Meanwhile, the tonsorial pressures of working at a fictional 1980s African American music channel found its fun expression in Bad Hair, a quasi-political, half-successful horror-comedy about a possessed weave from Dear White People director Justin Simien, a man who knows how to parody a Janet Jackson hit: I Get It colonised this head for days.

Elsewhere, female empowerment shone brightly in Herself, an Irish starting-over drama from Phyllida Lloyd built on the durable Wild Rose formula, scorched eyeballs in the rape-revenge provocation Promising Young Woman (starring Carey Mulligan), and made a glorious mess of things in Shirley, an Edward Albee-esque campus psychodrama starring Elisabeth Moss – in a raw, ragged turn that would make Jennifer Jason Leigh proud – as the liberated novelist Shirley Jackson. Shirley represents a major step forward for the stylish, near-experimental film-maker Josephine Decker (Madeline’s Madeline), whose atmospheric nuances were a perfect match for an essentially literary story that desperately needed breath in its lungs.

Still, for all this valid screenwriting, wouldn’t you know that a film based on tweets would suck up all the attention? Zola, a strippers-turned-sex-workers caper developed by Janicza Bravo from a viral 148-tweet thread, accrued some early buzz for its dense, Twitter-whistling soundscape and ultra-confident performances from Taylour Paige and the always interesting Riley Keough. To my eyes, though, we weren’t seeing something nearly as poetic as Harmony Korine’s trash-terpiece Spring Breakers. Rather, with Zola’s extended twerking shots and sub-Hustlers scenes of reinvention, we were lapping up sexploitation. (Composer Mica Levi, a genius constructor of trashy little beats, understood the gig better than anyone involved.)

Zola went down too easily; The Nowhere Inn, co-written by Annie Clark (AKA St Vincent) and Carrie Brownstein, knocked you back like a harsh shot of 180-proof strangeness. Kicking off in the vein of a Portlandia-like mockumentary about art-rock lifestyles, the film gets progressively more vicious, arriving – via a few Lynchian side streets – at the pungent idea that maybe we don’t want to demystify our pop stars all that much. Why do we need them to be like us? “I wanted us to be deeply, deeply, narcissistically unlikable,” Clark told viewers of the midnight world premiere, left stunned by a tour flick as distinctly fragrant as Prince’s Under the Cherry Moon, and sure to accrue its own legion of obsessives. That’s the truffle stink we were hunting for all week.

Best performance
Elisabeth Moss tears it up as a frazzled, unpredictable force of nature in Shirley (and her counterpart, Michael Stuhlbarg, is equally impressive).

Worst performance
Any of the obnoxiously wonderstruck kids in Wendy.

Weirdest, most welcome supporting actor
Willem Dafoe in The Last Thing He Wanted, as Anne Hathaway’s hard-drinking, arms-dealer dad — couldn’t the whole movie have been about him?

Biggest sale
A record $17.5m – plus an additional 69 cents to beat 2016’s The Birth of a Nation – for the rights to the surreal Andy Samberg comedy Palm Springs.

Most perfectly OK Hollywood remake of a far-better foreign film
Downhill, an unsurprising re-do of the brilliant Swedish family meltdown Force Majeure. Let Will Ferrell go full boy-man or cast someone else.