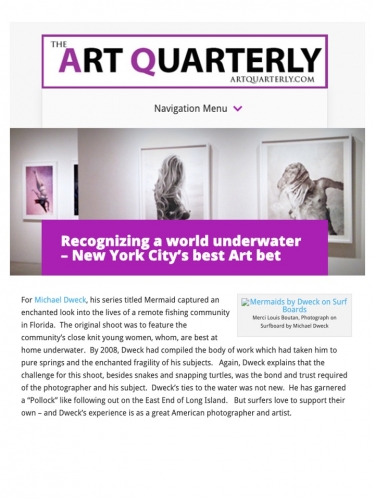 There are many openings to tend to in New York City.   One that the casual tourist to the hard core collector should not miss is “UNDERWATER,” featuring the water worlds of both Michael Dweck and Howard Schatz.

The show opened July 11th at the Staley-Wise gallery.   Located in SOHO, this venerable gallery has pulled two amazing talents together for a deep look at their focus on the underwater shoot.  As their detailed videos explain, shooting underwater takes a considerable amount of planning, time and the right subjects.

For Michael Dweck, his series titled Mermaid captured an enchanted look into the lives of a remote fishing community in Florida.  The original shoot was to feature the community’s close knit young women, whom, are best at home underwater.  By 2008, Dweck had compiled the body of work which had taken him to pure springs and the enchanted fragility of his subjects.   Again, Dweck explains that the challenge for this shoot, besides snakes and snapping turtles, was the bond and trust required of the photographer and his subject.  Dweck’s ties to the water was not new.  He has garnered a “Pollock” like following out on the East End of Long Island.   But surfers love to support their own – and Dweck’s experience is as a great American photographer and artist.

The master of underwater photography internationally though is Howard Schatz. For over 20 years he has dedicated his photography to continuing a perfection of the underwater shoot.   Unlike Dweck’s wild environment as the studio, Schatz explores how to create the etherial, pure, clear shot underwater in his controlled environment.   As his medical background demanded, Howard created a technically correct pool for his studio.  From balancing the PH levels to creating studio lighting underwater as if one was sitting in New York’s top modeling studios – Splashlight comes to mind.  The result has been trial and error leading to amazing “dazzelment” from his exacting choreography on film – typically cibachrome, chromogenic or archival pigment prints.   From the natural Fiji Island girl that became his cover to Pool Light to his floating angels, Supermodels from Sports Illustrated to children at play, Schatz has continuously found beauty and elegance in every click.

For both photographers the hallmark of their underwater work is on display – and should be collected today.   For hours or to set an appointment on your next visit to New York City with Staley-Wise, visit their website here or call 212-966-6223.