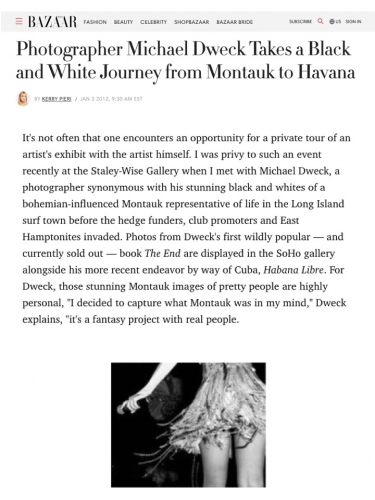 It's not often that one encounters an opportunity for a private tour of an artist's exhibit with the artist himself. I was privy to such an event recently at the Staley-Wise Gallery when I met with Michael Dweck, a photographer synonymous with his stunning black and whites of a bohemian-influenced Montauk representative of life in the Long Island surf town before the hedge funders, club promoters and East Hamptonites invaded. Photos from Dweck's first wildly popular — and currently sold out — book The End are displayed in the SoHo gallery alongside his more recent endeavor by way of Cuba, Habana Libre. For Dweck, those stunning Montauk images of pretty people are highly personal, "I decided to capture what Montauk was in my mind," Dweck explains, "it's a fantasy project with real people.

I created this narrative about what the ideal surf culture was like.
In my world the waves are always perfect and people always look good." The artist, who grew up in Long Island, first discovered Montauk in the '70s on a pilgrimage to try and find the Rolling Stones who had been spotted out there. He never found Mick, but he did happen upon Ditch Plains, a surf spot that plays a large role in the exhibit via beautiful landscape imagery and naturalistic nudes — a reoccurring theme in Dweck's work. "At Ditch Plains everyone is naked, they're changing in their cars, so it's fantasy mixed with reality — it happens as part of the story," he explains.

"Being forever young is a thread of a lot of my work — along with seduction, not desire, and places that are going through change, that are isolated — Montauk, Cuba, Aripeka." (Aripeka is the location of Dweck's second book, Mermaids). And so the artist somehow uses his camera to illustrate that a beachside town three hours from Manhattan is not as different from a Caribbean island with an "authoritarian" government as one might imagine. "For us, being American, Cuba is mysterious, taboo, off-limits. I knew there was an aura of seduction, and it's also very much stuck in the '50s, like Montauk," explains the photographer, who went to the island eight times in 14 months to capture what he calls the "creative class of Cuba," i.e. the artists, dancers and actors of a society most-known for suppressing personal freedoms. One of those artists, a model-esque painter named Rachel, is depicted on the cover of Habana Libre. "I was basically on the hood of a car photographing the girls [Rachel and an actress] on a main strip in Cuba while they were out for cocktails on a Sunday," Dweck says of the photo featuring two women with martinis and windblown hair, "She's like a rockstar. She represents a lot of what the project and Cuba became for me — optimistic, young, sexy, vibrant, fashionable, sophisticated, elegant — she became the thread of my narrative." That narrative also includes kinetic photos from The Tropicana, nudes of a local actress and a bar where Frank Sinatra used to hang out. In other words, where ever Michael Dweck goes, the pretty young things — with an affinity for the artist's life — seem to find him.

Habana Libre by Michael Dweck is on display at the Staley-Wise Gallery until January 28, when it will move onto the Fototeca de Cuba Museum in Havana, Cuba — marking the gallery's first showing by an American artist in a solo exhibition.