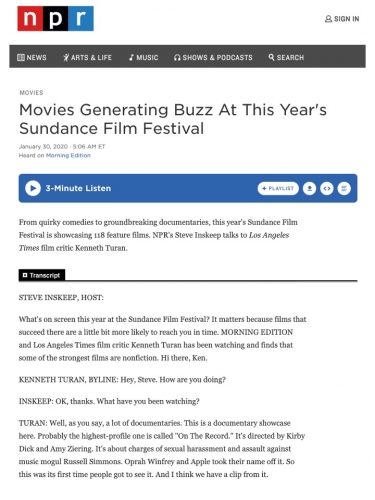 STEVE INSKEEP, HOST: What's on screen this year at the Sundance Film Festival? It matters because films that succeed there are a little bit more likely to reach you in time. MORNING EDITION and Los Angeles Times film critic Kenneth Turan has been watching and finds that some of the strongest films are nonfiction. Hi there, Ken.

KENNETH TURAN, BYLINE: Hey, Steve. How are you doing?

INSKEEP: OK, thanks. What have you been watching?

TURAN: Well, as you say, a lot of documentaries. This is a documentary showcase here. Probably the highest-profile one is called "On The Record." It's directed by Kirby Dick and Amy Ziering. It's about charges of sexual harassment and assault against music mogul Russell Simmons. Oprah Winfrey and Apple took their name off it. So this was its first time people got to see it. And I think we have a clip from it.

(SOUNDBITE OF DOCUMENTARY, "ON THE RECORD")

UNIDENTIFIED PERSON: America picks and chooses who they're going to listen to. Not only does class have an indicator, but what that person looks like has an indicator. So who we decide to listen to is totally predicated on who we see as valuable in America.

TURAN: Yes. And, you know, it's a very powerful film. It played very well here. The filmmakers got two standing ovations. It was really a very strong event. It was a very emotional moment, the kind of thing that people really come to Sundance for.

INSKEEP: But not the only film you've been watching at Sundance.

TURAN: No, there were two other documentaries that really charmed me. There's one called "The Truffle Hunters," which is exactly what it sounds like. It's about this group of old men and their old dogs in Northern Italy who search out white truffles. And this is an eccentric world that you have never heard of, never seen. And the film thrusts us into it.

And, you know, the other film I loved - and again, this is just completely different, which is why Sundance docs are so great - it's called "Giving Voice." It's about a competition among high school students every year about August Wilson monologues. Students immerse themselves in these monologues and really do a beautiful job with it. It's exceptionally moving. And also, you hear from actors who've worked with August Wilson, Viola Davis and Denzel Washington, talking about what the man and his work were like and why they're important.

DENZEL WASHINGTON: I asked him about his process, and he talked about how he would shut the doors and close the blinds and everything and the characters would come into the room and tell him what to write.

INSKEEP: That's Denzel Washington speaking there. There are dramas at Sundance as well. Is there one you want to mention?

TURAN: There is absolutely one I want to mention. Sundance has become a place - we think of it as a cutting-edge festival, but really, also, it's a home for serious, intellectual, adult dramas. One is called "The Father." It stars Anthony Hopkins and Olivia Colman. He plays an 80-year-old father who wants to live on his own. She's going to move to another country, and she's really worried about him. So this is about how that dynamic plays out, And you know, we know these actors. We think we know what they're going to do, but both of these people surprise us.

INSKEEP: I appreciate hearing that plot because it seems so simple and so common, even commonplace, that people are in that circumstance with an older relative. It's impressive they find the drama in that.

TURAN: Yes, yes. Well, I mean, I think we're all drawn to it because we all are about to live this story or are living it. But again, that's why we go to films, to dramatic films - because they illuminate crises and situations we are all in.

INSKEEP: A heavy dose of reality, even in the dramatic films. Ken, thanks so much.