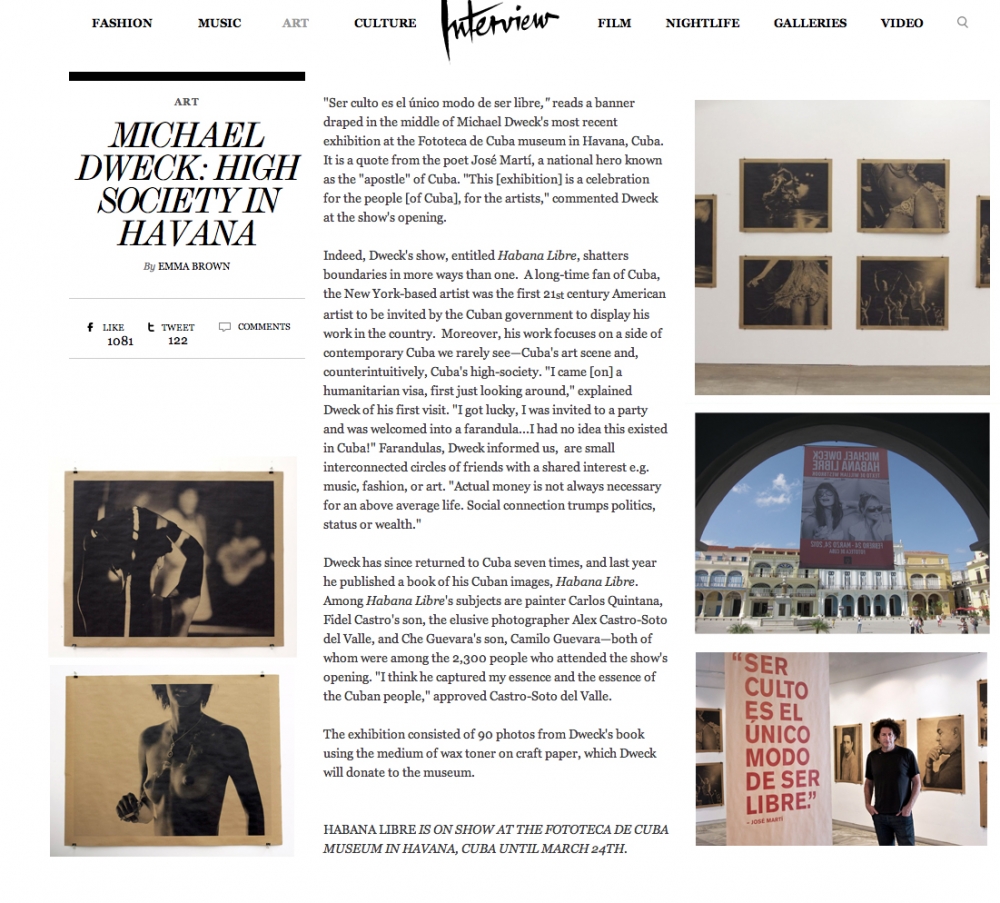 “Ser culto es el único modo de ser libre,” reads a banner draped in the middle of Michael Dweck’s most recent exhibition at the Fototeca de Cuba museum in Havana, Cuba. It is a quote from the poet José Martí, a national hero known as the “apostle” of Cuba. “This [exhibition] is a celebration for the people [of Cuba], for the artists,” commented Dweck at the show’s opening.

Indeed, Dweck’s show, entitled Habana Libre, shatters boundaries in more ways than one.  A long-time fan of Cuba, the New York-based artist was the first 21st century American artist to be invited by the Cuban government to display his work in the country.  Moreover, his work focuses on a side of contemporary Cuba we rarely see—Cuba’s art scene and, counterintuitively, Cuba’s high-society. “I came [on] a humanitarian visa, first just looking around,” explained Dweck of his first visit. “I got lucky, I was invited to a party and was welcomed into a farandula…I had no idea this existed in Cuba!” Farandulas, Dweck informed us,  are small interconnected circles of friends with a shared interest e.g. music, fashion, or art. “Actual money is not always necessary for an above average life. Social connection trumps politics, status or wealth.”

Dweck has since returned to Cuba seven times, and last year he published a book of his Cuban images, Habana Libre. Among Habana Libre‘s subjects are painter Carlos Quintana, Fidel Castro’s son, the elusive photographer Alex Castro-Soto del Valle, and Che Guevara’s son, Camilo Guevara—both of whom were among the 2,300 people who attended the show’s opening. “I think he captured my essence and the essence of the Cuban people,” approved Castro-Soto del Valle.

The exhibition consisted of 90 photos from Dweck’s book using the medium of wax toner on craft paper, which Dweck will donate to the museum.

HABANA LIBRE IS ON SHOW AT THE FOTOTECA DE CUBA MUSEUM IN HAVANA, CUBA UNTIL MARCH 24TH.