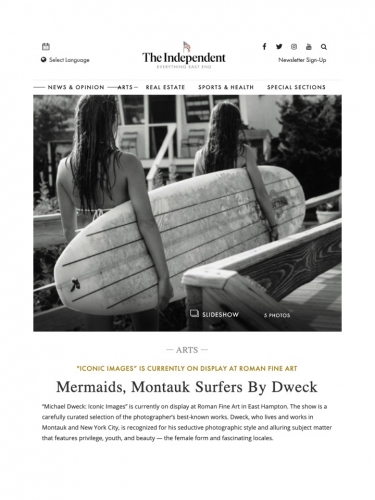 “Michael Dweck: Iconic Images” is currently on display at Roman Fine Art in East Hampton. The show is a carefully curated selection of the photographer’s best-known works. Dweck, who lives and works in Montauk and New York City, is recognized for his seductive photographic style and alluring subject matter that features privilege, youth, and beauty — the female form and fascinating locales.

The exhibit shows a few new images from the newly released expanded edition of his photo book, The End, Montauk, NY. Also featured are photographs from Dweck’s other successful books Mermaids and Habana Libre.

In the 1990s, Dweck rented a house at Ditch Plains in Montauk and sparked a friendship with one of the local surfers, who introduced him to the local surf community. After closing his advertising agency in 2002, Dweck began to photograph the subjects and scenes of Montauk. Dweck’s photographic essay, The End, Montauk, NY, follows surfers through daily rituals. The book displays portraits, nudes, and photographs of the landscape, celebrating the lives lived only to surf.

“It was the desire to record something before it faded away that was the catalyst for this project,” Dweck wrote in a 2004 essay about the book.

“That’s the way it always goes, isn’t it?” Dweck stated, referring to visitors of the once sleepy town. “Everyone who makes it to the fallout shelter tries to bolt the door behind him. It’s like some graffiti I read in the stall at the Shagwong Tavern. ‘Welcome to Montauk. Take a picture and get the f— out.’”

His book Mermaids, released in 2008, features a dazzling array of photographs that explore the theme of the female nude submerged in water. Dweck scouted Weeki Wachee Spring in Florida, the home of the famous mermaid shows, as one of the locations for his project. There Dweck met a young beauty from a nearby island fishing village, and began photographing her. Through her, Dweck met other “waterbabies” — girls who could hold their breath underwater for as long as five or six minutes — who became the subjects of his book. He also photographed “mermaids” for the book in Montauk, Amagansett, and Miami.

In his book Habana Libre, a contemporary exploration of a secret life within Cuba that was released in 2011, Dweck photographs exhilarating and provocative scenes of the privileged class in a classless society. It shows a face of Cuba never before photographed or seen by the Western world. Find interviews with sons of Fidel Castro and Che Guevara. The book shows the connected world of glamorous models, artists, filmmakers, musicians, and writers.

The show at Roman Fine Art runs through Monday, August 26.