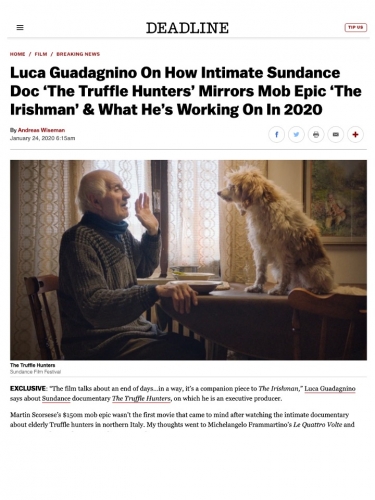 EXCLUSIVE: “The film talks about an end of days…in a way, it’s a companion piece to The Irishman,” Luca Guadagnino says about Sundance documentary The Truffle Hunters, on which he is an executive producer.

Martin Scorsese’s $150m mob epic wasn’t the first movie that came to mind after watching the intimate documentary about elderly Truffle hunters in northern Italy. My thoughts went to Michelangelo Frammartino’s Le Quattro Volte and Cosima Spender’s Palio. But Guadagnino is right in a sense.

“The Truffle Hunters is about a group at the end of their lives who see their world fading and their place in reality increasingly on the boundaries,” the filmmaker observes. “At the same time, the aggression of the new goes over their heads. It’s about mortality and approaching death. The image of the hunter who doesn’t want to hunt any more reminds me very much of Marty’s movie. It’s a study of people at the end of their lives, people who used to be at the centre of something. Their fragility and the fragility of old age is touching in the film.”

Michael Dweck and Gregory Kershaw, who were at Sundance two years ago with The Last Race, co-direct and produce the film, which explores a small and shrinking world inhabited by ancient Italian men and their beloved dogs. The men hunt for prized white alba truffles in rural Piedmont. Faced with unscrupulous newcomers determined to pillage their sacred hunting sites, as well as the omnipresent threat of climate change, they cling to a simpler, slower way of life, in harmony with the land. The film’s gentle flow and charming characters are a welcome respite from the bombast of awards season and the 24 hour news cycle.

Call Me By Your Name director Guadagnino came to the project via Greek producer Christos V. Konstantakopoulos with whom he worked last year on thriller Born To Be Murdered.

“I have a strong interest in anthropological movies like this,” the Italian helmer explains. “I was struck by the idea of a disappearing landscape and the story of someone who is not in sync with contemporary life but who is in step with the holistic experience of living. This friction is something I’m interested in. My film Cuoco Contadino speaks to that. This movie never judges its subjects but offers a sharp critique of the mechanism of power. The rhythm of nature and those rooted in the land is dissonant with the rhythms of big business. And yet they’re bound to one another.”

The filmmaker, who gave editorial advice and shared contacts with the movie’s creative team, is also right to see parallels with another of this year’s Oscar nominees, Honeyland, the Sundance 2019 doc about a Macedonian beekeeper. “Both films gaze on the lives of people with a strong connection to the land and who have very unique and particular skills.”

The film’s ecological message hits home with Guadagnino who recently bought a home in Piedmont. At the back of the property is a truffle field, which he says suffered from extended dry spells last year. “You try to take personal steps to help alleviate climate change. My personal view is that we are in danger.”

“It will be very interesting to see the reaction in snowy Sundance to this film about remote truffle hunting in Piedmont,” he laughs. “In a way, they seem worlds apart.”

Guadagnino is currently deep in post-production in Paris on HBO series We Are Who We Are about two American teenagers who come of age while living on an American military base in Italy. A launch date has yet to be set.

The Oscar-nominated filmmaker’s creative choices are keenly followed by industry and audiences alike. What can we expect in 2020, I ask him.

“I’m putting all my focus and concentration into We Are Who We Are and Born To Be Murdered,” he says. He is producing the latter, a Greece-set thriller about a vacationing couple, played by John David Washington and Alicia Vikander, who fall trap to a violent conspiracy. “I’m very enthusiastic about the film. It’s going to be a wonderful, passionate surprise.”

The Suspiria and I Am Love director says a busy schedule has left less time for writing over the past two years, but that the sequel to Call Me By Your Name remains on the agenda. “I’ve spoken about my ideas to Timothée [Chalamet] and Armie [Hammer] and we’re all eager.”

Blood On The Tracks, a project inspired by Bob Dylan’s seminal 1975 album, and Warner Bros’ Lord Of The Flies update, are two of the movies that could come together in 2020, he says. The writing process is starting on the latter, and the former is still being put together, he explains.

But Guadagnino no longer needs to force the issue.

“For a while I was trying to go against the flow of the way movies are made and it was kind of painful,” he says. “When I decided to go with the flow of the film business everything became better for me and I could get into things I love even more. I’m happy to be surprised and to see what happens.”