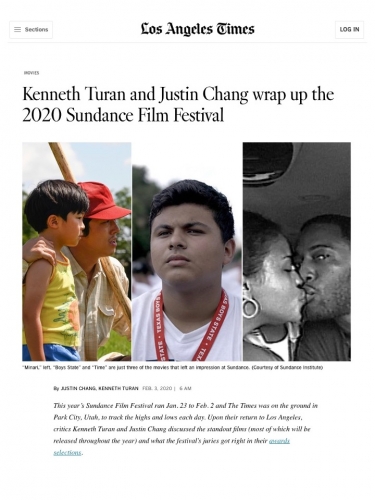 By Justin Chang and Kenneth Turan

This year’s Sundance Film Festival ran Jan. 23 to Feb. 2 and The Times was on the ground in Park City, Utah, to track the highs and lows each day. Upon their return to Los Angeles, critics Kenneth Turan and Justin Chang discussed the standout films (most of which will be released throughout the year) and what the festival’s juries got right in their awards selections.

KENNETH TURAN: Sundance 2020 now officially belongs to the ages, and I have to confess that it is wearing well in my memory.

What I appreciated is not necessarily the knockout films, though there were some, but how strong the lineup was across the board. Maybe I am just getting better at picking what I see, but there were lots of solid, engrossing films that did not make me feel like I was wasting my life watching them, and that is no small thing.

JUSTIN CHANG: Strong across the board is right. I’ll start by noting that the last two films I saw at Sundance this year both fell outside the festival’s competition and Premieres slates, and together they made for a most hypnotic double bill. First up was “Max Richter’s Sleep,” Natalie Johns’ pleasurably lulling documentary about the live performance of Richter’s gorgeous, eight-hour piece at Grand Park in Los Angeles.

Then came “Vitalina Varela,” Pedro Costa’s bleak, beautiful and uncompromising portrait of a woman who arrives in Portugal from Cape Verde after the death of her husband. It’s the first Costa film to play Park City, and a bit of a shock to the system, to judge by the steady stream of walkouts at my screening. (L.A. audiences will get to see it later this month at the Locarno in Los Angeles festival.) But movies like these are one reason Sundance remains a vital destination for cinephiles; distributors may be on the lookout for the next big crowd-pleaser, but there’s much to be said for an artistic experience that recalibrates your internal rhythms as you watch.

TURAN: Totally agreed. The best thing about being a spectator at Sundance is not seeing the latest buzzed-about feature ahead of the crowd but the chance to see compelling, entertaining films the crowd otherwise may never get a chance to experience.

On the dramatic side I thought of the Swedish film “Charter,” directed by Amanda Kernell, a searing look at a divorced woman and the relationships she has with her children and her ex that are so unblinkingly savage they make “Marriage Story” look positively mild.

As to documentaries that are sadly unlikely to go anywhere, I admit to being completely charmed by “The Mole Agent.” Set in Chile and directed by Maite Alberdi, it’s an AARP version of a John le Carré novel, following an 83-year-old man hired to go undercover at an old-age home to see if one of the residents is being looked after properly. A charmer with a point of view.

The big news out of Sundance, however, is always the winners, announced on Saturday night. Did any films you admired walk off with a prize?

CHANG: Quite a few did, actually, though I should note that, as is usually the case, I managed to see only a fraction of the 56 titles in competition. I feel grateful that one of them was Massoud Bakhshi’s “Yalda, a Night for Forgiveness,” the engrossing Iranian drama that won the top prize in the World Cinema dramatic competition. Let’s just say that as bad-marriage movies go, this one would fit nicely alongside “Charter” — and also, for that matter, the noncompeting entry “The Nest,” a brooding return to feature filmmaking from Sean Durkin (“Martha Marcy May Marlene”) that casts Jude Law and Carrie Coon as an increasingly unhappy couple.

Over in the U.S. dramatic competition, I was pleased to see Radha Blank win the directing award for her very sharp, funny and poignant comedy “The 40-Year-Old Version,” which she also wrote and starred in. Female filmmakers have long been well represented at Sundance — better represented, in fact, than they are in the industry overall — and their continued ascendancy was clearly one of the dominant stories of the 2020 edition. The jury also awarded special filmmaking prizes to Josephine Decker for “Shirley,” a feverishly inspired biographical drama starring Elisabeth Moss as the writer Shirley Jackson, and to Eliza Hittman for “Never Rarely Sometimes Always,” her bleak and powerful drama about a teenage girl trying to secure an abortion. Both very well deserved.

How about you, Kenny? What award winners did you love?

TURAN: The big news in the U.S. dramatic competition is that Lee Isaac Chung’s “Minari” pulled off the rare feat of taking both the grand jury prize and the audience award for its autobiographical story of a what happens to a young Korean American boy when he and his family move to Arkansas from California. “Minari” combined heartfelt storytelling with a restrained style to become one of the festival’s most popular films across the board, the kind of film Sundance was founded to showcase in the first place.

Other potent films to come away winners included Edson Oda’s impressively offbeat “Nine Days,” a speculative drama about personified souls wanting to be born that took the Waldo Salt Screenwriting Prize, and Heidi Ewing’s moving love story “I Carry You With Me,” whose inventive part-narrative, part-documentary style won both the audience award and the jury prize in the Next category.

Though they didn’t win anything, I want to put in a good word for a couple of dramas, specifically “Miss Juneteenth” and its all-in performance by Nicole Beharie as a former beauty queen, and the Tessa Thompson-starring “Sylvie’s Love,” as gorgeous and caring a re-creation of late-1950s/early-1960s New York as you are ever going to see.

CHANG: With regard to “Minari,” I should acknowledge that Chung — or Isaac, as I know him — is a dear friend of mine, and my entirely biased self could not be happier to see the embrace for his film. I also share your admiration, Kenny, for “Sylvie’s Love,” lovingly directed indeed by Eugene Ashe as a kind of stylized Harlem-set tribute to the lush domestic melodramas of Douglas Sirk, but this time with black characters front and center in a way that they seldom were in the ’50s and ’60s.

Among the U.S. documentary prizewinners, it was thrilling to see Garrett Bradley’s “Time,” one of my favorite films in the festival, win a directing award for its chronicle of 20 years in the life of an African American family torn apart by crime and punishment. It’s a dazzling formal feat, but more than that, it’s a profoundly sad movie about what it means to grow up without a father, to absorb that blow continually, day after day.

That makes “Time” an oddly fitting companion piece, I suppose, with another prize-winning nonfiction title, “Dick Johnson Is Dead,” in which the director Kirsten Johnson prepares to say goodbye to her father by making a movie about his inevitable death. In her previous feature, “Cameraperson,” Johnson proved that playfulness and profundity were far from mutually exclusive; she’s done the same here in a documentary whose mordant comedy becomes the ultimate expression of love.

Kenny, I know you saw more documentaries than I did. Did you and the jurors see eye to eye on any of them?

TURAN: Really, like you, “Time” was at the top of my list. It’s so rare for a pointed social-issue film to be emotionally compelling and dazzling in its filmmaking style — that’s a trifecta that doesn’t hit very often.

It was no surprise but satisfying nevertheless for “Boys State” to take the U.S. documentary grand jury prize. Acquired during the festival by Apple and A24 for a reported $12 million, a Sundance doc record, it speaks both to the current political moment and the power of individual personality in its fly-on-the-wall look at a thousand Texas high-school students spending a week wheeling and dealing and constructing a representative government from scratch.

I also wanted to give a final shout-out to another doc about teenagers, “Giving Voice,” where you can watch the way performing playwright August Wilson’s superb monologues actually change lives. And of course to the film that won hearts if not awards, “The Truffle Hunters,” where old and cranky men and their old and cranky dogs leave no Northern Italian stone unturned in their search for elusive but valuable white truffles.

CHANG: “The Truffle Hunters” is indeed a delight. I say that as more of a dog person than a truffle person myself, but directors Michael Dweck and Gregory Kershaw’s film left me with renewed affection for both. Happily, it was acquired during the festival by Sony Pictures Classics, so audiences will get to see it.

Just as they will get to see Miranda July’s wonderfully unpredictable Evan Rachel Wood-starring comedy, “Kajillionaire” (in talks with the distributor A24 as of this writing); Phyllida Lloyd’s moving drama “Herself,” starring and co-written by the excellent Clare Dunne (acquired mid-festival by Amazon Studios); Emma Sullivan’s insidiously creepy Netflix documentary “Into the Deep”; and many more movies that we’ll be writing about over the next several months that made this edition of Sundance so worthwhile.