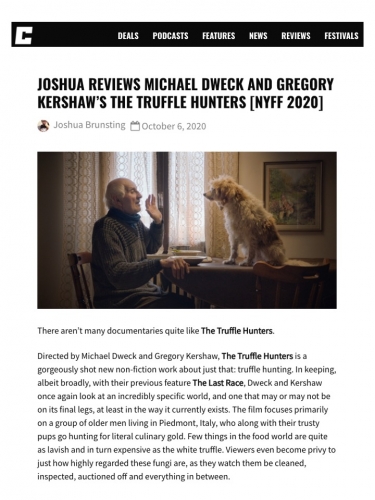 There aren’t many documentaries quite like The Truffle Hunters.

Directed by Michael Dweck and Gregory Kershaw, The Truffle Hunters is a gorgeously shot new non-fiction work about just that: truffle hunting. In keeping, albeit broadly, with their previous feature The Last Race, Dweck and Kershaw once again look at an incredibly specific world, and one that may or may not be on its final legs, at least in the way it currently exists. The film focuses primarily on a group of older men living in Piedmont, Italy, who along with their trusty pups go hunting for literal culinary gold. Few things in the food world are quite as lavish and in turn expensive as the white truffle. Viewers even become privy to just how highly regarded these fungi are, as they watch them be cleaned, inspected, auctioned off and everything in between.

Think Sweetgrass by way of Ulrich Seidl. Very much about craft and art in its own way, Hunters points more towards the great artist biographies of its time than it does anything resembling a culinary doc. Dweck and Kershaw, while clearly interested in the preparation of a truffle as that’s its ultimate end, the film’s intrigue comes not from any clinical deconstruction of cooking, instead from how the art that gives the world these beautiful fungi is dying off with the men that use it.

Breaking down these two comparison points, Dweck and Kershaw’s film feels very much indebted to the works of both Seidl and the group from the Harvard Ethnography Lab. Told through expertly composed static tableaus, these sequences lack any real verite style, instead feeling at once completely tactile and lived in, and yet strangely theatrical, much like the works of Ulrich Seidl. There are particular sequences like that of a group of hunters bickering with one another that have a particularly arch quality to them. It’s also endlessly fascinated with the way money and capitalism plays into this universe. Literalizing it through things like one hunter complaining about the reason young people want into the business or doing it more abstractly through the scene compositions when the film sends viewers out of the hunters company, this is a picture about a dying artform and the men that practice it.

And yet it’s also simply one of 2020’s more pleasant nature documentaries. Like Sweetgrass’s shepherds as they walk their sheep through miles and miles of Montana wilderness, Truffle Hunters’s titular men are seen not just hunting for truffles but, even more so, connecting on an almost spiritual level with the dogs that accompany them. The film’s most touching moments aren’t the men preparing for a hunt or consumers bidding for the right to eat what these men hunt for, it’s the hunters and their dogs connecting in ways that feel truly intimate and universal. This is a nature documentary through and through, it just so happens that as capitalism continues to destroy moral fiber across the globe, the one bond it cannot break is that between man and his companion.

At just 84 minutes, Truffle Hunters is a complete and utter delight. Wonderfully modulating between experiential nature doc and sharp-witted socio-economic issue picture, the latest from directors Michael Dweck and Gregory Kershaw is a charming, often incredibly funny and touching, rumination on a dying way of life.