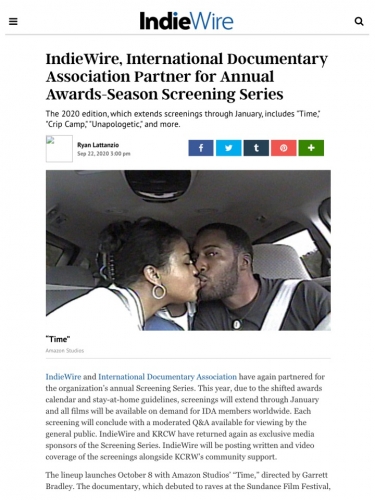 IndieWire and International Documentary Association have again partnered for the organization’s annual Screening Series. This year, due to the shifted awards calendar and stay-at-home guidelines, screenings will extend through January and all films will be available on demand for IDA members worldwide. Each screening will conclude with a moderated Q&A available for viewing by the general public. IndieWire and KRCW have returned again as exclusive media sponsors of the Screening Series. IndieWire will be posting written and video coverage of the screenings alongside KCRW’s community support.

The lineup launches October 8 with Amazon Studios’ “Time,” directed by Garrett Bradley. The documentary, which debuted to raves at the Sundance Film Festival, follows Fox Rich, an entrepreneur, author, and mother of six. She has spent the last 21 years fighting for the release of her husband, Rob, who is serving a 60-year sentence for an offense they both committed.

The films in the series bring authentic voices to audiences around the world, while also shining a light on the biggest nonfiction awards contenders of the year. So far, this year’s lineup includes 16 projects by BIPOC filmmakers, 20 by women-identified filmmakers, and 11 by filmmakers from the international community.

“At this time of incredible challenge and change brought on by the global pandemic and the movement for racial justice, these documentary films do not only peel back the curtain on injustice, they celebrate our resilience, our diversity, and our capacity for creativity and making change,” said Simon Kilmurry, executive director of IDA.

The lineup includes films such as “The Fight,” directed by Elyse Stinberg, Josh Kriegman, and Eli B. Despres; “Unapologetic,” directed by Ashley O’Shay; “Boys State,” directed by Amanda McBaine and Jesse Moss; “Disclosure,” directed by Sam Feder; “The Truffle Hunters,” directed by Gregory Kershaw and Michael Dweck; “Athlete A,” directed by Bonni Cohen and Jon Shenk; “The Dissident,” from Bryan Fogel; “Dick Johnson Is Dead,” from Kirsten Johnson; “John Lewis: Good Trouble,” by Dawn Porter; “Crip Camp,” directed by James Lebrecht and Nicole Newnham; and many more of the year’s best documentaries.