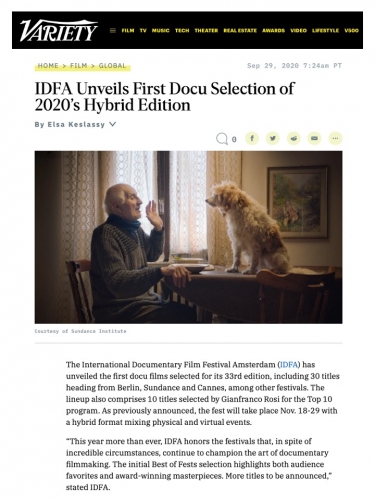 The International Documentary Film Festival Amsterdam (IDFA) has unveiled the first docu films selected for its 33rd edition, including 30 titles heading from Berlin, Sundance and Cannes, among other festivals. The lineup also comprises 10 titles selected by Gianfranco Rosi for the Top 10 program. As previously announced, the fest will take place Nov. 18-29 with a hybrid format mixing physical and virtual events.

“This year more than ever, IDFA honors the festivals that, in spite of incredible circumstances, continue to champion the art of documentary filmmaking. The initial Best of Fests selection highlights both audience favorites and award-winning masterpieces. More titles to be announced,” stated IDFA.

The Best of Fest roster includes “The Truffle Hunters” by Michael Dweck and Gregory Kershaw, which premiered at Sundance and was part of Cannes and Telluride selections; Elizabeth Lo’s “Stray,” an award-winning film from Hot Docs and Tribeca portraying Turkish city life through the eyes of stray dogs; Andrey Gryazev’s “The Foundation Pit,” which premiered at this year’s Berlin and uses found footage to construct a collective message from Russian citizens to Putin’s government; Garrett Bradley’s “Time,” which won Sundance’s Directing Award and looks at the urgent issue of mass-incarcerated African Americans; and Radu Ciorniciuc’s “Acasă, My Home,” the award-winning documentary about the life of a Roma family on the fringes of Romanian society.

Along with online industry events that will take place Nov. 16-20, IDFA will screen 200 films in 15 theaters across Amsterdam, as well as run three virtual cinemas.

Gianfranco Rosi will be the guest of honor of this edition and will be celebrated with a retrospective of the Italian master’s work, spanning documentaries, hybrid, and fiction titles, notably his latest movie “Notturno.”

The selection will also include films that helped shape Rossi, notably Italian masterpieces such as “Anna” by Alberto Grifi and Massimo Sarchielli, and 10 shorts by Vittorio De Seta, as well as Robert Kramer’s “Route One/USA” and Jack Hazan’s “A Bigger Splash.”