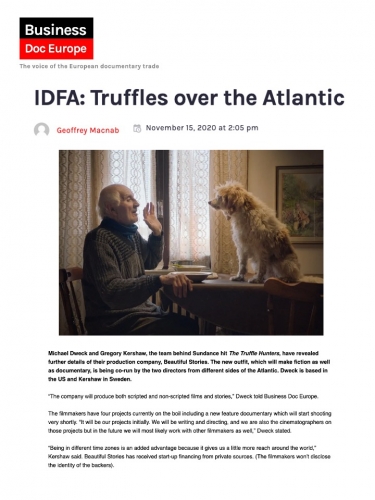 Michael Dweck and Gregory Kershaw, the team behind Sundance hit The Truffle Hunters, have revealed further details of their production company, Beautiful Stories. The new outfit, which will make fiction as well as documentary, is being co-run by the two directors from different sides of the Atlantic. Dweck is based in the US and Kershaw in Sweden.

“The company will produce both scripted and non-scripted films and stories,” Dweck told Business Doc Europe.

The filmmakers have four projects currently on the boil including a new feature documentary which will start shooting very shortly. “It will be our projects initially. We will be writing and directing, and we are also the cinematographers on those projects but in the future we will most likely work with other filmmakers as well,” Dweck stated.

“Being in different time zones is an added advantage because it gives us a little more reach around the world,” Kershaw said. Beautiful Stories has received start-up financing from private sources. (The filmmakers won’t disclose the identity of the backers).

The Truffle Hunters follows a group of elderly but still very hardy and sprightly men in Piedmont, Italy, as they go in dogged pursuit of their holy grail, the Alba truffle.

The film was executive produced by Luca Guadagnino (the prolific and brilliant Italian director of Call Me By Your Name, Suspiria and A Bigger Splash).

Guadagnino came abroad thanks to an introduction from the film’s Greek producer, Christos V. Konstantakopoulos of Faliro House Productions. “He was friendly with Luca and said ‘I heard Luca bought a piece of land right where you are filming, ‘truffle land,” and he has a truffle dog. Maybe it is a good opportunity to show him some of what you are doing’.”

The directors therefore showed Guadagnino early footage of their documentary. The Italian liked it so much he immediately agreed to help in whatever way he could. “He has given us notes on cuts as we have progressed. He has been helpful when it came to the acquisition of the film. He has been a really good partner.”

In the documentary, Dweck and Kershaw reveal the extraordinary lengths to which the truffle hunters go in pursuit of their beloved fungus.

Truffles are very big business, selling for thousands of dollars. Are they really that delicious?

“The reason people become so obsessed with truffles is that when you’re eating them, you are consuming a bit of the magic of this process,” Kershaw said. “There is this taste which is like nothing else. While filming, we were lucky – we met a lot of great chefs in the region and had truffles [prepared by] some of the best chefs in the world. But I think the most incredible meal we ever had was during the first year we were filming and when we were trying to gain the trust of the truffle hunters.”

There had been a drought and very few truffles were being found. However, after rain in late November, one diligent hunter found one.

“It was a really nice big truffle that could sell for a good amount of money. We assumed the first thing he would do was get in touch with the truffle dealer but he didn’t. He took us to his house. He had a wood burning fire. He started to build a fire and then he took a cast iron pan. Then he went outside and got eight eggs. He cracked the eggs in the pan and he shaved the truffle over those eight eggs…and then he shared it with us.”

These, Kershaw insists, were by far the most delicious truffles the filmmakers ever ate. More than that, the meal marked their symbolic entrance into the world of the hunters.

The Truffle Hunters is being released in the US by Sony Pictures Classics on Christmas Day. The film receives its Dutch premiere this week in IDFA’s Best of Fests section