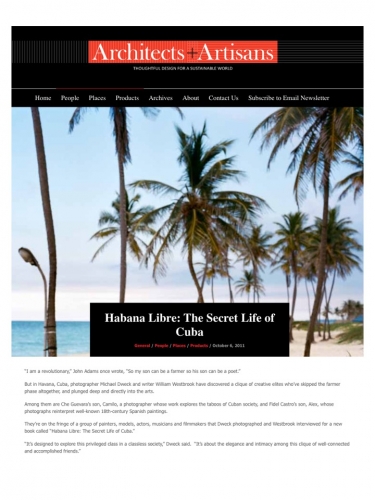 But in Havana, Cuba, photographer Michael Dweck and writer William Westbrook have discovered a clique of creative elites who’ve skipped the farmer phase altogether, and plunged deep and directly into the arts.

Among them are Che Guevara’s son, Camilo, a photographer whose work explores the taboos of Cuban society, and Fidel Castro’s son, Alex, whose photographs reinterpret well-known 18th-century Spanish paintings.

They’re on the fringe of a group of painters, models, actors, musicians and filmmakers that Dweck photographed and Westbrook interviewed for a new book called “Habana Libre: The Secret Life of Cuba.”

“It’s designed to explore this privileged class in a classless society,” Dweck said.  “It’s about the elegance and intimacy among this clique of well-connected and accomplished friends.”

In addition to interviews with the sons of Che and Fidel, the book also features Kelvis Ochoa, a musician Dweck likens to Bruce Springsteen as the voice of a new generation in Cuba, painters Rene Francisco and Rachel Valdez, as well as Viviana Libya, the former first lady of Bolivia.

“They’re allowed to travel freely, to have studios and to sell their wares,” Dweck said.  “They have access to equipment.  If you’re a talented drummer and nine years old, you’re brought to an academy, and stay there straight through college – and in the end, you’ll play in a great jazz band.  It’s not like here where you end up being a waiter.”

Dweck and Westbrook visited Havana eight times over a period of 14 months, spending about 80 days there, enabling them to stay with and get to know that one group of friends.

“I was lucky – on my second day there, I was invited to a party by a Brit,” Dweck said.  “I went at 1:00 AM to this 1950s modern house on the ocean, with waves crashing.  It was hot — about 95 degrees, and Kelvis was playing, with people dancing around a turquoise pool.  I realized I was in the middle of an underground of artists and models, and realized I wanted to be part of it – and chronicle how it made me feel that night.”