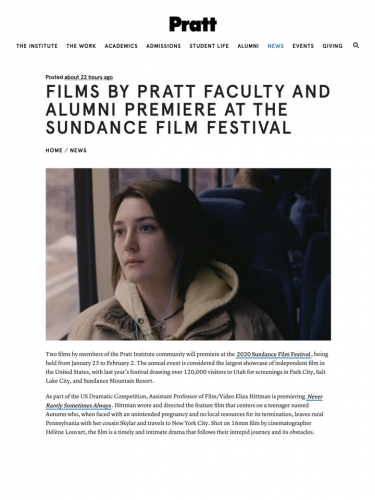 Two films by members of the Pratt Institute community will premiere at the 2020 Sundance Film Festival, being held from January 23 to February 2. The annual event is considered the largest showcase of independent film in the United States, with last year’s festival drawing over 120,000 visitors to Utah for screenings in Park City, Salt Lake City, and Sundance Mountain Resort.

As part of the US Dramatic Competition, Assistant Professor of Film/Video Eliza Hittman is premiering Never Rarely Sometimes Always. Hittman wrote and directed the feature film that centers on a teenager named Autumn who, when faced with an unintended pregnancy and no local resources for its termination, leaves rural Pennsylvania with her cousin Skylar and travels to New York City. Shot on 16mm film by cinematographer Hélène Louvart, the film is a timely and intimate drama that follows their intrepid journey and its obstacles. Hittman previously debuted her film Beach Rats in the US Dramatic Competition at the 2017 Sundance Film Festival, where she was honored with the Directing Award.

In the World Cinema Documentary Competition, Michael Dweck, BFA Communications Design ‘79, is premiering The Truffle Hunters. The feature-length documentary, directed and produced by Dweck with Gregory Kershaw, follows the hunt for the rare white Alba truffle in the forests of Northern Italy. Unable to be cultivated, and only found by a small group of aging Italians who search for it by night, the truffle is one of the culinary world’s greatest prizes. Dweck previously premiered his directorial debut, The Last Race, at the 2018 Sundance Film Festival and was a 2019 Sundance Institute Catalyst Forum fellow and Music and Sound Design Lab fellow.