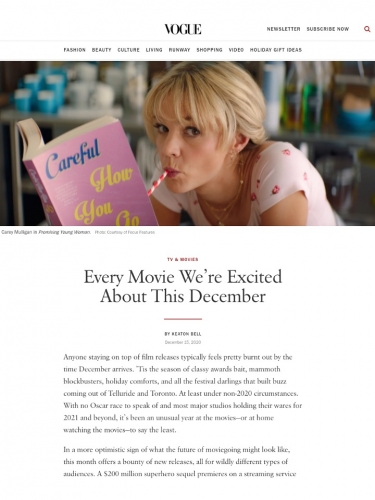 Anyone staying on top of film releases typically feels pretty burnt out by the time December arrives. ’Tis the season of classy awards bait, mammoth blockbusters, holiday comforts, and all the festival darlings that built buzz coming out of Telluride and Toronto. At least under non-2020 circumstances. With no Oscar race to speak of and most major studios holding their wares for 2021 and beyond, it’s been an unusual year at the movies—or at home watching the movies—to say the least.

In a more optimistic sign of what the future of moviegoing might look like, this month offers a bounty of new releases, all for wildly different types of audiences. A $200 million superhero sequel premieres on a streaming service the same day an indie thriller about a woman hunting sexual predators bows in theaters. Meryl Streep goes from sequined hot pants in a Netflix musical to a pair of chunky glasses in an HBO Max drama. In a year where television dominated the cultural conversation by means of sheer availability, it’s starting to feel like there are almost too many new movies to talk about again.

Black Bear (Out Now)
Aubrey Plaza is so synonymous with the deadpan humor that defined her breakout role in Parks and Recreation that it can be easy to take her dramatic chops for granted. In the twisty, uncategorizable Black Bear, the actor sheds any semblance of her former April Ludgate persona for her most thrillingly loose performance to date. The psychological drama focuses on a couple (Christopher Abbott and Sarah Gadon) whose lives are disrupted by the arrival of a writer-filmmaker (Plaza) to their remote lake house in the Adirondacks. To say any more would spoil all the meta surprises that make Black Bear such a trip.
Available on VOD

The Prom (Out Now)
Depending on their tolerance for Ryan Murphy’s particularly earnest brand of camp, audiences will find The Prom either delightful or unwatchable within seconds. Based on the Broadway musical about a group of self-absorbed theater stars who rally around a high schooler barred from taking her girlfriend to prom, the film’s good intentions are mostly enough to overcome any Technicolor flaws. It’s also difficult to complain with Meryl Streep vamping it up as a flame-haired diva who always travels with her Tony Awards in tow.
Available on Netflix

Godmothered (Out Now)
Godmothered is the perfect holiday wind-down for kids that’s just as fun for the adults. In the spirit of live-action fantasies like Enchanted, the family comedy stars Jillian Bell as a fairy godmother-in-training whose lack of skill is matched only by her boundless enthusiasm. Determined to prove her worth to her fellow fairies, she sets out to fulfill the childhood wish of a now-adult TV producer played by Isla Fisher.
Available on Disney Plus

Let Them All Talk (Out Now)
Steven Soderbergh’s latest certainly delivers on its titular demand. Starring Meryl Streep as an author embarking on a trip with two friends played by Dianne Wiest and Candice Bergen, Let Them All Talk floats effortlessly on the quippy improvisation of its leading ladies. Shot over two weeks with a bare-bones cast and crew aboard the Queen Mary 2, there’s no better escape from the current moment than a luxury cruise across the Atlantic with a beshawled Streep.

Mank (Out Now)
Written by his late father Jack Fincher, David Fincher’s latest is a black-and-white passion project centered around the making of and mythology around Citizen Kane. Told through the eyes of its troubled screenwriter Herman J. Mankiewicz, the biopic is steeped in Old Hollywood glamour. Though it was filmed with period-authentic equipment from the ’30s and ’40s, Mank’s greatest practical effect ends up being Amanda Seyfried’s luminous turn as the doe-eyed Marion Davies.
Available on Netflix

Wild Mountain Thyme (Out Now)
Adapting his play Outside Mullinger for the screen, writer-director John Patrick Shanley only leans further into his theatrical sensibilities. Starring Emily Blunt and Jamie Dornan as a pair of star-crossed Irish farmers, the romantic fable is even more syrupy than its poster image of rain-soaked lovers would suggest. Shot on location among the rugged coastlines and cozy villages of Western Ireland, it’s worth the price of a rental for the scenery alone.
Available in select theaters and on VOD

*** I’m Your Woman*** (Out Now)
In the canon of crime classics like Straight Time or The Godfather, female characters tend to get sidelined once the action starts. For * I’m Your Woman*, writer-director Julia Hart shines the spotlight on a character type we’ve seen in those films plenty of times but rarely ever spend much time with: the long-suffering housewife. Forced to go on the run with a newborn after her husband betrays his partner-in-crime, this ‘70s-set drama stars Rachel Brosnahan as a wife and mother who couldn’t be further from Midge Maisel.
Available on Amazon Prime

Ma Rainey’s Black Bottom (Dec. 18)
As the legendary “Mother of the Blues,” Viola Davis is nothing short of electrifying in this stately adaptation of August Wilson’s stage play. But it’s the late Chadwick Boseman in his final performance who ends up stealing the show. As an ambitious trumpet player in Ma Rainey’s band who clashes with the temperamental performer, the film is at its most dynamic whenever Boseman is at the center of it.
Coming to Netflix

Another Round (Dec. 18)
It should come as no surprise that a film about the pleasures of day-drinking is one of the best offerings of 2020. The Danish dramedy focuses on a group of high school teachers who decide to test out a theory that having a constant blood alcohol level of 0.050 improves your personal, professional, and creative lives. Led by a wickedly deadpan Mads Mikkelson, Another Round is the most fun you’ll have this year watching a group of adult men experience midlife crises.
Coming to VOD

Ariana Grande: Excuse Me, I Love You (Dec. 21)
In the absence of live music, I’ve become particularly grateful for the handful of videos I’ve recorded at concerts over the past several years. I still regularly rewatch the grainy iPhone footage I took at the Brooklyn stop for Ariana Grande’s Sweetener World Tour, a glossy pop spectacle that left me covered in more glitter than I arrived wearing. The superstar’s new concert film Excuse Me, I Love You takes audiences on-stage and behind-the-scenes of her 2019 arena tour, released exactly one year after the last stop.
Coming to Netflix

Sylvie’s Love (Dec. 23)
An old-school romance with charm to spare, * Sylvie’s Love* celebrates the exquisite pleasures of Black life and love. Tessa Thompson stars as Sylvie, an employee at her father’s record store in ’50s Harlem who falls for a saxophonist played by Nnamdi Asomugha. Detailing a summer romance that never rings false thanks to the chemistry of its leads, * Sylvie’s Love* is a delicately rendered period piece that feels vibrantly alive.
Coming to Amazon Prime

The Midnight Sky (Dec. 23)
For his seventh feature in the director’s chair, George Clooney draws from his own past in sci-fi epics like Solaris and Gravity for a new intergalactic tale. The Midnight Sky follows a scientist in the Arctic named Augustine (Clooney) who’s the sole survivor of a global catastrophe that wiped out the planet (FYI, this isn’t what I would call “escapist entertainment”). With a deep-space exploration crew on their way back to Earth unaware of the carnage they face, Augustine goes on a mission through the Arctic Circle to warn them off with the help of a mysterious young girl he meets along the way.
Coming to Netflix

Wonder Woman 1984 (Dec. 25)
Originally scheduled for this past May, the long-delayed Wonder Woman 1984 will finally be available to stream on HBO Max the same day it’s released in theaters. With Warner Bros. putting the pricey blockbuster on a streaming platform, the film is bound to get even more eyes on it. (A side effect: throwing the future of moviegoing into further question.) This time around, Gal Gadot’s Wonder Woman faces off against an egomaniacal businessman (Pedro Pascal) and a cat-like superhuman (Kristen Wiig).
select theaters

Promising Young Woman (Dec. 25)
Like a delicately-wrapped bonbon laced with arsenic, the brightly-colored world of Promising Young Woman is deceiving. The Crown star Emerald Fennell wrote and directed this black comedy about a once-promising young medical student traumatized by events in her past who is later presented with the opportunity for revenge. A thrillingly-crafted piece of pulp, Promising Young Woman entertains while also indicting the societal mechanisms that enable toxic masculinity and rape culture to persist. Carey Mulligan weaponizes the corseted persona she’s built over a decade of period dramas for her most provocative role to date. In any average year, her work might seem too audacious for an Academy that gave last year’s best-actress prize to a Judy Garland biopic. But 2020 wasn’t your average year, and no performance in recent memory pulls off what Mulligan accomplishes in a film that walks a tonally tricky balancing act.
Coming to select theaters

The Truffle Hunters (Dec. 25)
If you’re in need of an instant serotonin boost, I can’t stress enough how delightful this documentary about elderly Italian men and their dogs is. One of the breakout hits from last year’s Sundance Film Festival, The Truffle Hunters follows a handful of the titular scavengers hunting for rare and expensive white Alba truffles deep in the woods of Northern Italy. A celebration of agrarian traditions that also recognizes its eccentricities, the documentary offers a uniquely prepared dish with a colorful cast of characters.
Coming to VOD and select theaters

News of the World (Dec. 25)
Good luck convincing your family to go see Promising Young Woman on Christmas Day after your dad finds out there’s a new Tom Hanks movie. Hanks stars as a widowed Civil War veteran in this western helmed by his former Captain Phillips director Paul Greengrass. Tasked with delivering a young girl taken by members of the Kiowa tribe back to the surviving members of her family, the duo embark on a journey across treacherous terrain where they face all manner of danger.
Coming to select theaters

One Night in Miami (Dec. 25)
Having quietly helmed episodes of series like Scandal and Insecure while winning every acting award under the sun, Regina King makes her feature directorial debut with One Night in Miami… Adapted by Kemp Powers from his play of the same night, the drama recounts a fictionalized celebration between Muhammad Ali, Jim Brown, Sam Cooke, and Malcolm X following Ali’s unexpected title win over Sonny Liston in 1964. Powerfully acted by its quartet of leads in a story that packs a timely punch, One Night in Miami… suggests a promising future for King’s directing career.
Coming to Amazon Prime