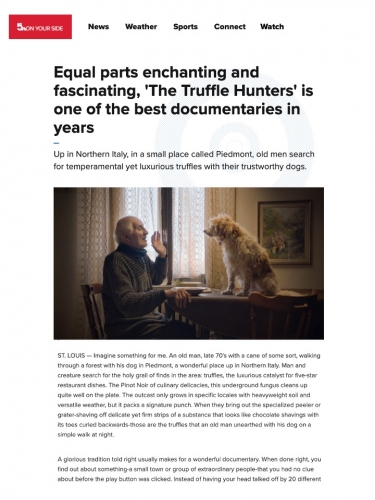 Up in Northern Italy, in a small place called Piedmont, old men search for temperamental yet luxurious truffles with their trustworthy dogs.

ST. LOUIS — Imagine something for me. An old man, late 70's with a cane of some sort, walking through a forest with his dog in Piedmont, a wonderful place up in Northern Italy. Man and creature search for the holy grail of finds in the area: truffles, the luxurious catalyst for five-star restaurant dishes. The Pinot Noir of culinary delicacies, this underground fungus cleans up quite well on the plate. The outcast only grows in specific locales with heavyweight soil and versatile weather, but it packs a signature punch. When they bring out the specialized peeler or grater-shaving off delicate yet firm strips of a substance that looks like chocolate shavings with its toes curled backwards-those are the truffles that an old man unearthed with his dog on a simple walk at night.

A glorious tradition told right usually makes for a wonderful documentary. When done right, you find out about something-a small town or group of extraordinary people-that you had no clue about before the play button was clicked. Instead of having your head talked off by 20 different people, we are immersed in the lives of hardcore Italian farmers who dedicate their lives to serving others in their small slice of Europe with some of the most exotic food components known to man. Viewers see the truffle game from every angle: hunter, trader, critic, and consumer. But you never feel preached to, spoken down to, and it's never boring. You feel like a new way of life is being introduced to you suddenly.

The most intimate moments happen between Aurelio Conterno, one of the most famous truffle hunters alive, and his lovely dog, Yirba. Whether it's singing a funny yet sad song about life throwing you curveballs as well as lemons or passionate cuddling and petting his devoted pooch, you will fall in love with the people and their tiny world. Normally, when you hit 80 years of age, retirement is in order. But then we see the aging semi-gracefully Carlo sneaking out of his house in the middle of the night to go listen to the owls with his dog in the woods-and maybe, just maybe, find a truffle in the process.

The process is the fascinating part. The dog runs ahead in the forest, smelling the ground as if it were hiding gold underneath. The human follows in closely after the dog until the spot is located. Once there, the two species, bound by the kind of friendship that even time can't buy, work together to unearth the treasure. As Aurelio explains, "my dog finds truffles in the forest and I make fondue with them for us. What more do you need?" A fair question cemented over decades of devotion and sadly, much loss.

Every sweet tale has a bitter rub to it, and here it's the outside world's need to impose their will and steal the ancient hunter's truffle magic. They come to town asking about the certain areas that... let's just say... carry more garlic aroma than others. Aurelio and Carlo, among others, resist the urges of outsiders handing them blank checks. The double-edged sword to a free world is anyone can walk around the forest, including the decrepit souls that leave poison pellets on the ground for the dogs to unfortunately find. You'll hear the pain of a retired hunter's voice when he lists the reasons that he can't hunt anymore. Another older soul, who looks like he stepped off a KISS tour, cries to a local policeman about losing two of his dogs to such casualties. Ones that continue to go on these days.

But the truffle artists endure. That makes Michael Dweck and Gregory Kershaw's documentary so enchanting. Over just 84 minutes, you form a deep bond with strangers who crave the peaceful life, and then watch in horror as certain parties try to steal it. It's like watching a live game between David and Goliath. Commerce versus tradition, the oldest fight in the books and one that still has legs. I could watch this documentary again right now. It's that good and throughout the highs and lows, the film is very uplifting. Right when you thought the Italians could be challenged for most unorthodox arguing skills, you will watch a fight between Carlo and his wife that is quietly funny and relatable. Bob Seger wasn't lying when he said we are all just running against the wind. In Piedmont, they just want to find amazing things in the forest with their companions.

How good is this movie? I watched it twice in 24 hours. It's a special piece of work that reminds you that certain things in life shouldn't be monetized or hold a price. They are sacred and secret for a reason. "The Truffle Hunters" may be the first documentary where I wanted a sequel or follow-up.