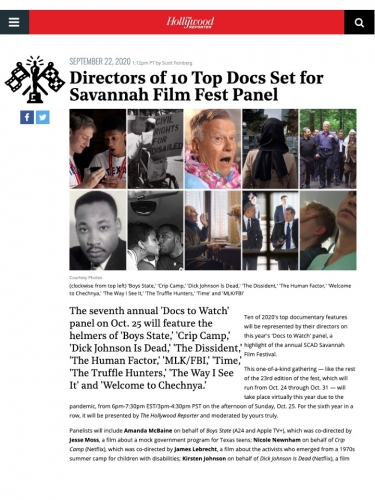 The seventh annual 'Docs to Watch' panel on Oct. 25 will feature the helmers of 'Boys State,' 'Crip Camp,' 'Dick Johnson Is Dead,' 'The Dissident,' 'The Human Factor,' 'MLK/FBI,' 'Time,' 'The Truffle Hunters,' 'The Way I See It' and 'Welcome to Chechnya.'

Ten of 2020's top documentary features will be represented by their directors on this year's 'Docs to Watch' panel, a highlight of the annual SCAD Savannah Film Festival.

This one-of-a-kind gathering — like the rest of the 23rd edition of the fest, which will run from Oct. 24 through Oct. 31 — will take place virtually this year due to the pandemic, from 6pm-7:30pm EST/3pm-4:30pm PST on the afternoon of Sunday, Oct. 25. For the sixth year in a row, it will be presented by The Hollywood Reporter and moderated by yours truly.

Ticketholders will be able to view the panel live. It will also be recorded and air exclusively on THR's website shortly after it takes place. (The THR website currently showcases the panels from 2014, 2015, 2016, 2017, 2018 and 2019; in five of those six years, the eventual best documentary feature Oscar winner was represented on the panel.)

The SCAD Savannah Film Festival, which is usually held in Georgia on the campus of the Savannah College of Art and Design, is the nation's largest university-run film fest. In recent years, under the oversight of artistic director Christina Routhier, the event, long known for its beautiful setting and Southern hospitality, has become an important stop on the awards circuit.

Tickets to the 2020 'Docs to Watch' panel and all other festival offerings will go on sale at 10 a.m. EST on Oct. 1 at https://filmfest.scad.edu.