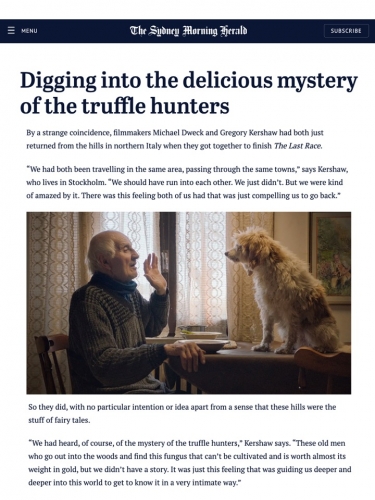 By a strange coincidence, filmmakers Michael Dweck and Gregory Kershaw had both just returned from the hills in northern Italy when they got together to finish The Last Race.

“We had both been travelling in the same area, passing through the same towns,” says Kershaw, who lives in Stockholm. “We should have run into each other. We just didn’t. But we were kind of amazed by it. There was this feeling both of us had that was just compelling us to go back.”

So they did, with no particular intention or idea apart from a sense that these hills were the stuff of fairy tales.

“We had heard, of course, of the mystery of the truffle hunters,” Kershaw says. “These old men who go out into the woods and find this fungus that can’t be cultivated and is worth almost its weight in gold, but we didn’t have a story. It was just this feeling that was guiding us deeper and deeper into this world to get to know it in a very intimate way.”

It took three years. Truffle hunters generally don’t want to be found; some of them deny they hunt truffles at all. Kershaw and Dweck didn’t speak Italian, let alone the local Piedmontese language. But the filmmakers kept coming back, quietly asking if anyone knew a truffle hunter, then found a translator who helped build the bridges they needed.

“Piedmontese isn’t just a language. It’s a whole way of being, a whole way of interacting, especially between men and women: a playful combativeness,” says Kershaw. “[The translator] knew how to make these truffle hunters feel very comfortable with her and then bring us into the family.”

Truffles are sold like diamonds but hunting them isn’t a living; these are pensioners and part-time vintners for whom truffling is a passion handed down through the generations.

“You have to imagine how difficult it is to find these things,” says Dweck. “They need these really perfect conditions to grow. Imagine they’re going out every night, these 80 or 85-year-old men going out in the dark at night, no lights, walking 15 to 20 kilometres a night.”

They are paid a fraction of the eventual price. Carlo’s wife Maria begs him to stop; he’s 84. What if he falls? No, he says. He needs to hear the owls. Anyway, these old men are startlingly healthy. “These are young-spirited characters,” says Dweck. “There’s no medications anywhere, there’s nobody walking round with broken hips, these are people who are just constantly outside.”

But not everything in their bucolic world is perfect, he adds. The finding is getting harder, thanks to climate change, deforestation and the intrusion of truffle profiteers who pull the fungi too early. The success of the film – it is heavily tipped for an Oscar – has helped the filmmakers to set up a conservation project to buy back forests and run education programmes “teaching young people to come into the woods in the right way”, says Dweck.

Worst of all, there are competitors who lay poison for other dogs. Sergio, a vivid eccentric who sings to his dogs in his ancient car as they career down muddy tracks, sobs on camera after his dog dies in front of him. The moment passes; the directors thought they had to include something that happened on their watch, but didn’t want to emphasise it in a film that sets out to share joy. “The film is a celebration of life, a celebration of the potential for the human spirit, so we didn’t want to dwell on it,” says Kershaw.

What they wanted to convey, he says, was not so much a dossier on truffles as a subjective truth about the place. The hillsides are like abstract paintings in autumnal impasto; the characters are remarkable; there are even moments when we are able to experience the forest floor from a dog’s point of view, thanks to camera rigs put together by a local cobbler and attached to one dog’s head. Hearing his snuffles as we nose with him through the leaves and loam is sheer delight.

“When we took the camera out it was like the world was speaking to us, telling us how it wanted to be filmed,” says Kershaw. “The intention was that you would feel like you were moving through a storybook. Each frame is a new page.”