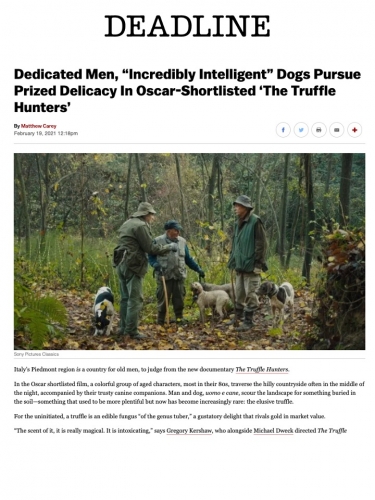 Italy’s Piedmont region is a country for old men, to judge from the new documentary The Truffle Hunters.

In the Oscar shortlisted film, a colorful group of aged characters, most in their 80s, traverse the hilly countryside often in the middle of the night, accompanied by their trusty canine companions. Man and dog, uomo e cane, scour the landscape for something buried in the soil—something that used to be more plentiful but now has become increasingly rare: the elusive truffle.

For the uninitiated, a truffle is an edible fungus “of the genus tuber,” a gustatory delight that rivals gold in market value.

“The scent of it, it is really magical. It is intoxicating,” says Gregory Kershaw, who alongside Michael Dweck directed The Truffle Hunters. “There’s an auction that we filmed, a truffle that’s like a kilogram sold for $100,000. This is something that if you don’t eat it in three days, it’s gone. It’s no longer good. It’s really astonishing.”

Kershaw and Dweck spent several years in the Piedmont area, absorbing the culture that surrounds the tartufo.

“This truffle, it can’t be cultivated. That’s another part of the reason that it’s so desired,” Kershaw notes. “It can only be discovered by this ancient knowledge that’s passed down through generations, and takes a lifetime to cultivate, and a dog trained for three years. That’s the only way you can find a truffle.”

Sniffing out the truffle hunters proved a challenge for the filmmakers. Locals described the secretive, old masters in almost mythic terms.

“They took us outside. ‘Up in those hills, in the dark, there are these men. We’ve never met them before. We don’t know who they are. They’re crazy,’” Dweck recalls them saying. “They had all these stories they had invented about these people.”

The truffle hunters Dweck and Kershaw met weren’t crazy; in fact they were more like the salt, and perhaps pepper, of the earth. Aurelio, Angelo, Sergio, 89-year-old Carlo—it wasn’t easy convincing them to appear in the film.

“We’d just share a lot of wine and a lot of espresso, and be invited into their homes,” Dweck tells Deadline. “In many ways, they became our extended family. I think that was part of the process that helped us quite a bit, was just spending time. It took a lot of time there before we could just take out a camera.”

Eventually the filmmakers were invited to join the men and their dogs on the hunt. Some sequences in the film were shot from the canines’ POV, courtesy of a “dog cam.”

“We experimented a lot. We got all these high-tech contraptions that we found on the internet, and blogs, and talking to other filmmakers. None of them worked,” Kershaw shares. “We finally worked with an Italian shoe cobbler…They custom-built little mounts, after numerous iterations, that went on the dog’s heads. They fit them comfortably…It’s so cool to be sprinting through the forest as a dog and see the world passing around.”

White truffles attach themselves to the roots of old oak and poplar trees, the filmmakers explain. When a dog hones in on the scent, it’s an ecstatic moment.

“You see that absolute bliss that they have,” Kershaw observes. “You can feel them smiling as they’re digging in the ground…The whole time the truffle hunter and the dog are getting more and more excited.”

The bond between hunter and dog is something to behold, like the one between Aurelio and his devoted Birba.

“The first time we got invited into Aurelio’s house, he said, ‘I’ll make you some lunch,’” Dweck remembers. “He gets the pot of soup and brings it to the table…He says, ‘Birba gets the chicken, the carrots, the celery.’ The broth is left, and he said, ‘Okay, now you guys can sit down,’ and he gave us a couple of spoonfuls of broth. We knew at that point who was important in his life. It was really Birba.”

Kershaw continues, “Birba seemed to have this incredible intelligence. When they were going out, she would pick up the clothes that Aurelio was going to need, his hat, his gloves, and give them to him…She could read your emotions very carefully. She knew exactly what you were going to do, what your intention was, before you did it.”

Danger lurks in this bucolic world of the truffle hunters. The prices fetched by the fungi have led many more people to horn in on the activity, and some have gone so far as to poison other people’s dogs. The way of life captured in The Truffle Hunters is further imperiled by global warming and deforestation.

“The white truffle…only grows in this thin strip of land that’s mostly in Italy and in the neighboring countries. As the climate changes, there are just fewer and fewer of them every year, because it depends on these very, very, very specific conditions,” Kershaw explains. “Scientists talk about the possibility, if climate change and environmental change continues the way that it’s going, that it could be gone forever.”

Sony Pictures Classics will release The Truffle Hunters in theaters in New York and LA on March 5, with a nationwide expansion to follow. It was named one of the top five documentaries of the year by the National Board of Review and earlier this month earned a Producers Guild Award nomination. Covid interrupted plans for a big screening at the 2020 Torino Film Festival, to which all the characters in the film had been invited.

“They had never been to a movie before, ever. Some of the dogs were coming,” Dweck says. “The town prepared a whole street fair for them. We had the old 1930s movie theater cranked up again to show them in the theater.”

The filmmakers hope they can put on an event like that in the summer. They have grown very fond of the truffle hunters and the land they call home.

“We ended up falling in love with this place and these people,” Dweck affirms. Adds Kershaw, “It felt to us like a fairytale. It felt like we were stepping into a storybook.”