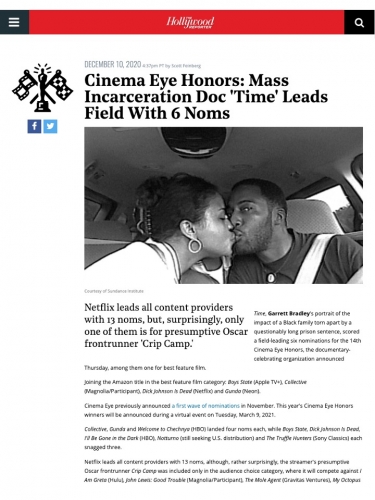 Netflix leads all content providers with 13 noms, but, surprisingly, only one of them is for presumptive Oscar frontrunner 'Crip Camp.'

Time, Garrett Bradley's portrait of the impact of a Black family torn apart by a questionably long prison sentence, scored a field-leading six nominations for the 14th Cinema Eye Honors, the documentary-celebrating organization announced Thursday, among them one for best feature film.

Cinema Eye previously announced a first wave of nominations in November. This year's Cinema Eye Honors winners will be announced during a virtual event on Tuesday, March 9, 2021.

Netflix leads all content providers with 13 noms, although, rather surprisingly, the streamer's presumptive Oscar frontrunner Crip Camp was included only in the audience choice category, where it will compete against I Am Greta (Hulu), John Lewis: Good Trouble (Magnolia/Participant), The Mole Agent (Gravitas Ventures), My Octopus Teacher (Netflix) and The Social Dilemma (Netflix).