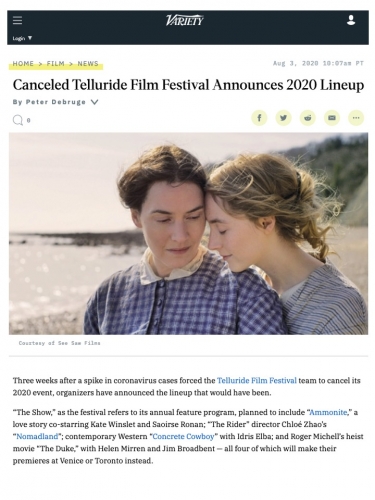 Three weeks after a spike in coronavirus cases forced the Telluride Film Festival team to cancel its 2020 event, organizers have announced the lineup that would have been.

“The Show,” as the festival refers to its annual feature program, planned to include “Ammonite,” a love story co-starring Kate Winslet and Saoirse Ronan; “The Rider” director Chloé Zhao’s “Nomadland”; contemporary Western “Concrete Cowboy” with Idris Elba; and Roger Michell’s heist movie “The Duke,” with Helen Mirren and Jim Broadbent — all four of which will make their premieres at Venice or Toronto instead.

But many of the films in the documentary-heavy lineup were not selected for either of those festivals, which explains why Telluride executive director Julie Huntsinger felt it was important to share their selections. The Telluride team typically keeps their selections secret until the day before the festival, which takes place over Labor Day weekend in the small Colorado community.

Until July 14, Huntsinger and her team had been exploring ways to host a safe version of the event, including social distancing, reserved seating and outdoor screenings. But locals weren’t so keen on the idea, and the school district had asked the festival not to use their facilities, and many attendees were rolling their passes over to 2021 instead.

Considering the havoc COVID-19 has wreaked on the creative community, executive director Julie Huntsinger felt that making their selections public — and sharing details on where some of them can be seen — was the best way to support the films and filmmakers. In addition to screening films, the festival arranges three Silver Medallion Awards each year, with special tributes held for the honorees. This year’s honorees would have been Anthony Hopkins (whose well-reviewed Sundance drama, “The Father,” was selected), “Ammonite” star Kate Winslet and “Nomadland” writer-director-producer Chloé Zhao.

“All In: The Fight for Democracy” (Liz Garbus, Lisa Cortés, U.S.)

“The Bee Gees: How Can You Mend a Broken Heart” (Frank Marshall, U.S.)

“The Most Beautiful Boy in the World” (Kristina Lindström, Kristian Petri, Sweden)

“There Is No Evil” (Mohammad Rasoulof, Germany-Iran)

“To the Moon” (Tadhg O’Sullivan, Ireland)