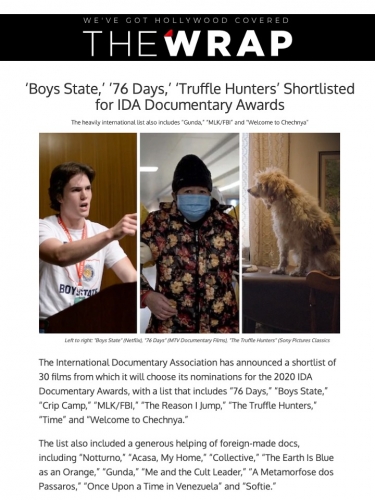 The International Documentary Association has announced a shortlist of 30 films from which it will choose its nominations for the 2020 IDA Documentary Awards, with a list that includes “76 Days,” “Boys State,” “Crip Camp,” “MLK/FBI,” “The Reason I Jump,” “The Truffle Hunters,” “Time” and “Welcome to Chechnya.”

The list also included a generous helping of foreign-made docs, including “Notturno,” “Acasa, My Home,” “Collective,” “The Earth Is Blue as an Orange,” “Gunda,” “Me and the Cult Leader,” “A Metamorfose dos Passaros,” “Once Upon a Time in Venezuela” and “Softie.”

The shortlisted films present a dramatically different view of the year in nonfiction filmmaking than the Critics Choice Documentary Awards, which were announced on Monday. Only three films — “Crip Camp,” “Gunda” and “Time” – were among the 30 docs shortlisted by the IDA and the 14 nominated in the top category by the Critics Choice voters.

The 11 films that were nominated by Critics Choice but not shortlisted by the IDA include “Dick Johnson Is Dead,” “The Fight,” “The Social Dilemma,” “The Painter and the Thief” and “Athlete A,” while both organizations bypassed the high-profile docs “All In: The Fight for Democracy,” “The Dissident,” “Totally Under Control” and “The Way I See It.”

Netflix, Magnolia, POV and the National Film Board of Canada each placed two films on the shortlist. No other company had more than one, although HBO and HBO Europe each had one.

The shortlist is compiled by committees in the IDA, an organization that was founded in 1982 to support nonfiction filmmaking. Additional committee will select up to 10 films from the shortlists to become IDA Documentary Award nominees.