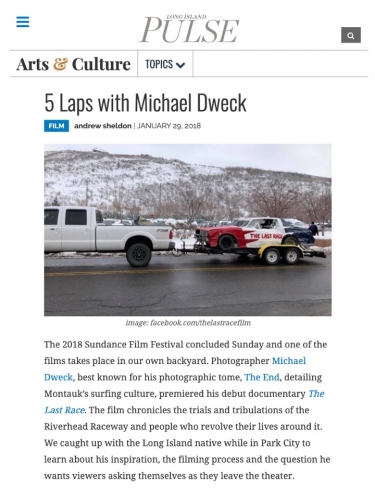 The 2018 Sundance Film Festival concluded Sunday and one of the films takes place in our own backyard. Photographer Michael Dweck, best known for his photographic tome, The End, detailing Montauk’s surfing culture, premiered his debut documentary The Last Race. The film chronicles the trials and tribulations of the Riverhead Raceway and people who revolve their lives around it. We caught up with the Long Island native while in Park City to learn about his inspiration, the filming process and the question he wants viewers asking themselves as they leave the theater.

Starting Young
You wouldn’t know it gazing at Long Island’s current landscape, but the region was once a racing hotbed, littered with tracks just like Riverhead Raceway. At one point, there were 40 such speedways, one of which was in Freeport. This is how Dweck was introduced to the sport. He was a frequent visitor growing up just two towns to the east. He frequented the Freeport track every week with his father, and loved every minute of it. “It was dangerous and violent and cool. It’s a place where you forgot about everything going on.”

Years in the Making
Even before he set out on the ambitious project of directing his first documentary, Dweck documented the Riverhead Raceway in his traditional media: photography. He spent five years photographing classic cars. “That became my studio…I set up a big cyc wall about 20 feet long and documented cars before they disappeared because those cars were all from the 60s and 70s. It’s the only track in the country that races these stock cars.”

Tough Terrain
The logistics did not make Dweck’s first foray into filmmaking any easier. Shooting in the middle of the summer on a scorching tar surface, meant plenty of 95-degree days where “pieces of rubber stick to your skin.” On top of that, many of the film characters weren’t exactly willing participants—they didn’t like a cameraman intruding on their one weekly moment of glory. “They’re hardworking laborers during the week and come Saturday night they’re there to win. They don’t want a guy filming their hand on a steering wheel for a half hour.”

First-hand View
In The Last Race, Dweck turns the audience from third-person passenger to first-person driver. “I welded the cameras into the cars. I wanted the audience to feel what it’s like to be in one of those cars. It’s loud and it’s violent. You’re going to feel what I felt like in the pits.”

Lasting Impression
Self-contemplation may not be what you’d expect to get out of a documentary detailing stock car racing, yet it is precisely what Dweck hopes people leaving the theater contemplate. “I want them to ask themselves, ‘What am I doing with my life?’ The country, I think is just bored. That’s why you hear all this about opioids and people sitting on the couch checking their social media.” On the contrary, Dweck looks at this race track and its drivers and fans as participating, which “makes you feel like a human.”