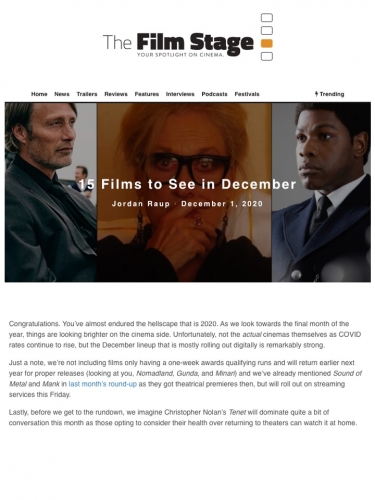 Congratulations. You’ve almost endured the hellscape that is 2020. As we look towards the final month of the year, things are looking brighter on the cinema side. Unfortunately, not the actual cinemas themselves as COVID rates continue to rise, but the December lineup that is mostly rolling out digitally is remarkably strong.

Just a note, we’re not including films only having a one-week awards qualifying runs and will return earlier next year for proper releases (looking at you, Nomadland, Gunda, and Minari) and we’ve already mentioned Sound of Metal and Mank in last month’s round-up as they got theatrical premieres then, but will roll out on streaming services this Friday.

Lastly, before we get to the rundown, we imagine Christopher Nolan’s Tenet will dominate quite a bit of conversation this month as those opting to consider their health over returning to theaters can watch it at home.

15. Monster Hunter (Paul W.S. Anderson)
There may not have been many blockbusters this year, but 2020 will close out with one of the most promising of the bunch. The videogame adaptation of Monster Hunter has been in development with Paul W.S. Anderson for much of the last decade and now everyone’s favorite vulgar auteurist is ready to unveil it. Looking to bring some epic scope and pure popcorn-munching fun to his take on story, the film reteams him with his action muse, Milla Jovovich, while the case also includes Tony Jaa, Tip ‘T.I.’ Harris, Meagan Good, Diego Boneta, Josh Helman, Jin Au-Yeung, and Ron Perlman.
Where to Watch: Theaters (Dec. 25)

14. 76 Days (Hao Wu, Weixi Chen, and Anonymous)
While there will be many COVID-related documentaries over the next decade-plus, one of the first out of the gate sets a high bar. Christian Gallichio said in our TIFF review, “76 Days, from directors Hao Wu, Weixi Chen, and an anonymous filmmaker, is a heartbreaking work of documentary vérité investigating the emerging COVID-19 outbreak at a single hospital in Wuhan, China, and their response from early February to April 2020, when Wuhan lifted their initial lockdown. Eschewing contextualizing features (narration, title cards, etc.), 76 Days places viewers alongside doctors and nurses as they struggle to control the spiraling implications of COVID-19, dealing with an influx of scared patients, a virus they do not fully understand, and diminishing resources. Though 76 Days proves a hard watch, it’s a profoundly visceral look into how one hospital dealt with the raging virus.”
Where to Watch: Virtual Cinemas (Dec. 4)

13. Soul (Pete Docter)
After a few bumps in the road, Pixar looks to be back to form with Soul, Pete Docter’s follow-up to Inside Out. David Katz said in our review, “A reservation often aired towards Inside Out was about its basis in reality, or how it went about characterizing the emotions we all feel. Really, it attempted to demystify the intangible processes of memory and consciousness, carefully laying out each explained concept like a jaunty science lecturer eager we don’t miss a beat. Soul bests this aspect of the film, by focusing on something far more hypothetical.”
Where to Watch: Disney+ (Dec. 25)

12. Promising Young Woman (Emerald Fennell)
Featuring a stellar Carey Mulligan performance even if a rather cartoonish approach to its subject matter leaves a bit to be desired, Promising Young Woman finally arrives this month after being delayed due to the pandemic this past spring. Dan Mecca said in our Sundance review, “So much of what makes Promising Young Woman work so well is in what’s not on screen. Far more contemplative than initial marketing might suggest, this is a revenge fantasy only in the simplest of terms. Where one might expect violence as a form of therapy, there is instead a brutal examination of societal norms that allow men to be evil.”
Where to Watch: Theaters (Dec. 25)

11. Ma Rainey’s Black Bottom (George C. Wolfe)
The latest August Wilson adaptation to hit screens once again stars Viola Davis, this time accompanied by Chadwick Boseman, and the result is quite an achievement. Christian Gallichio said in his review, “A reliably stoic actor in his sadly truncated career, Boseman steals the film, showcasing a twitchy high-wire act rarely seen in his previous work. He’s not only the best thing in the film, which also features Davis at her most flamboyant, but it’s the best work he’s ever done, a towering achievement in his final film role.”
Where to Watch: Netflix (Dec. 18)

10. Wolfwalkers (Tomm Moore and Ross Stewart)
The most stunningly detailed animation of the year doesn’t tell the most original story, but there’s still plenty to feast your eyes on in Wolfwalkers. Jared Mobarak said in our TIFF review, “This is a fairy tale seeking to teach inclusion and compassion since all oppressed groups should be able to relate to the oppression of another. It’s a difficult prospect in many cases as nationalism and war prove strong drugs, but seeing the truth with one’s own eyes generally does the trick. So when one of those woodsmen is staring down the snout of a wolf clawing at his chest, he screams for his life. And when two feral yet beautiful creatures stop the violence to heal his wounds, he can’t help questioning everything he’s been told.”
Where to Watch: Apple TV+ (Dec. 11)

9. One Night in Miami (Regina King)
Following her Oscar win last year for If Beale Street Could Talk, Regina King is back with her first directorial feature. Jared Mobarak said in our TIFF review, “The power behind Regina King’s directorial debut (adapted by Kemp Powers from his own play) One Night in Miami… is epitomized by an exchange between Malcolm X (Kingsley Ben-Adir) and Jim Brown (Aldis Hodge) a little more than halfway through. It’s the night their friend Cassius Clay (Eli Goree) became the surprise heavyweight-boxing champion of the world and the two are alone in the former’s hotel room while the Champ chases down the fourth member of their quartet, Sam Cooke (Leslie Odom Jr.), after he stormed out frustration. The conversation moves from colorism to the motivations for their actions straight into the notion of duty within the civil rights movement. Malcolm sees his friends as leaders armed with the voices and platforms to shift the tide.”
Where to Watch: Theaters (Dec. 25) and Amazon Prime (Jan. 15)

8. Let Them All Talk (Steven Soderbergh)

7. Another Round (Thomas Vinterberg)
After delivering one of the best performances of his career with The Hunt, Mads Mikkelsen has reteamed with director Thomas Vinterberg. Following a group of friends who launch a drinking experiment to test their creativity and mindset, it’s another riveting drama from these collaborators. Jared Mobarak said in his review, “If you find yourself needing to latch onto an obscure scientific theory to reinvigorate your energy level and live your life as more than a sleepwalking zombie, you’re probably not ready to actually confront the real problem. We know this to be true of the quartet at the center of Thomas Vinterberg’s effective, cathartic drama.”
Where to Watch: Theaters (Dec. 4) and VOD (Dec. 18)

6. To the Ends of the Earth (Kiyoshi Kurosawa)
Kiyoshi Kurosawa’s To the Ends of the Earth, which premiered at the Locarno Film Festival last year, and was a selection at TIFF, NYFF, BFI London, Busan, Viennale, AFI Fest, Tokyo IFF, Taipei Golden Horse FF, and more in recent months, is now finally arriving in the United States. Leonardo Goi said in our review from its Locarno premiere, “Six years after his 2013 Seventh Code, Kurosawa leaves his familiar Tokyo grounds to embark on his second feature outside Japan, again with singer-cum-actress Atsuko Maeda as lead, only this time the setting isn’t Vladivostok, Russia, but the sprawling prairies of Uzbekistan, and the film doesn’t unfurl as a thriller, but a resolutely low-key, unassuming charmer, an intimate portrait of someone thrown into a foreign land and struggling to find her bearings back.”
Where to Watch: Virtual Cinemas (Dec. 11)

3-5. Red, White and Blue, Alex Wheatle, and Education (Steve McQueen)
Considering Steve McQueen himself ended the debate two months ago whether or not Small Axe is film or TV, how about we shift the conversation to the actual project itself? After Lovers Rock and Mangrove, the following three films in the series will roll out this month. We’ve reviewed the John Boyega-led Red, White and Blue (with the others coming soon) and Vikram Murthi said, “John Boyega, finally free from the clutches of Disney and Lucasfilm, imbues Leroy with a believable idealism, and his performance goes a long way to ensuring that his awakening to the full, intractable extent of the MPS’ internal racism has the appropriate emotional punch.”
Where to Watch: Amazon Prime (Dec. 4, 11, and 18)

2. The Truffle Hunters (Michael Dweck and Gregory Kershaw)
“If you’re not picky, you can eat them on anything.” So says one of the elite group of experienced, elder Italian truffle hunters portrayed in Michael Dweck and Gregory Kershaw’s stately, charming new documentary, regarding their prized possessions. The only issue is these delicacies from the ground are impossible to find without knowledge, skill, and a trusted dog. And when they are miraculously discovered, they go for an incredible amount of money. The Truffle Hunters explores this age-old tradition of culinary treasure-hunting and the clash of passion and commerce around such a specific way of life. Executive produced by Luca Guadagnino, it’s also far from your standard documentary in terms of the picturesque approach in which we meticulously enter this Northern Italy milieu. Continue reading my review.
Where to Watch: Theaters (Dec. 25) Update: Sony Classics has delayed the film to March 12, 2021.

1. Mayor (David Osit)
The reign of bigotry and terror from Donald Trump and his administration can often take the form of a myopic view for those in the United States, witnessing on a daily basis how the soon-to-be-ousted leader is further corroding the sharp political divide in his own country. However, the reverberations of his decisions, of course, have a global impact, and David Osit’s riveting new documentary Mayor shows how the President’s heedless actions have exacerbated long-held strife in Ramallah, the Palestinian city in the central West Bank located mere miles from Jerusalem. The ”city in transition” is led by Musa Hadid, a humble Christian mayor who deeply empathizes with his community as they are controlled by the Israelis and surrounded by their encroaching settlements. The threat against their livelihood reaches more peril when Trump officially declares Jerusalem as Israel’s capital in 2017, leaving Palestinians attempting to survive without a place to truly call home. Continue reading my review.
Where to Watch: Virtual Cinemas (Dec. 2)