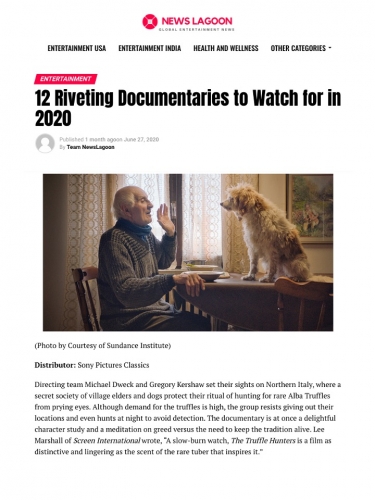 The documentaries at this year’s Sundance Film Festival shared stories of good versus evil, of hard work and cutting loose, of reflections on life and death, of sharing never-before-seen stories and keeping viewers informed. With so many documentaries to choose from, it can be easy to get lost in all of the options. Fortunately, if you missed the film industry’s annual trek to Park City, many of these award-winning films will soon make it to a streaming platform or screen near you.

Boys State, Distributor: Apple TV+, A24
First-time director Amanda McBaine made the jump from producing to collaborate with her The Overnighters director Jesse Moss for an incisive look at U.S. politics through the eyes of young boys in Texas. The result is an astonishing documentary that examines how young people are shaping politics and how campaign strategies affect our own views – even on the scale of a boys’ civics camp. On awards night, Boys State won the U.S. Grand Jury Prize in its category. Jordan Raup wrote in The Film Stage, “This extraordinary portrait of a democratic process in microcosm is both a testament to how Washington, D.C. and the rest of the country could achieve bipartisanship as well as a look at what has led to such a fractured political system.”

The Truffle Hunters, Distributor: Sony Pictures Classics
Directing team Michael Dweck and Gregory Kershaw set their sights on Northern Italy, where a secret society of village elders and dogs protect their ritual of hunting for rare Alba Truffles from prying eyes. Although demand for the truffles is high, the group resists giving out their locations and even hunts at night to avoid detection. The documentary is at once a delightful character study and a meditation on greed versus the need to keep the tradition alive. Lee Marshall of Screen International wrote, “A slow-burn watch, The Truffle Hunters is a film as distinctive and lingering as the scent of the rare tuber that inspires it.”

The Dissident, Distributor: N/A
Oscar-winning documentarian Bryan Fogel investigates the mysteries surrounding the death of Washington Post journalist Jamal Khashoggi after he entered the Saudi Arabian consulate in Turkey and never returned to his fiancée, Hatice Cengiz. The film retraces his steps through new footage and the testimonies of those who knew him for an intimate portrait of a man whose work continues to spurn the Saudi Arabian officials who tried to silence him. Eric Kohn of Indiewire said, “Fogel assembles a sturdy compendium of talking heads to explain how Khashoggi managed to speak truth to power for so long, and why his fate reverberates for other Saudis who share his sentiments.”

Much Mucho Amor, Distributor: Netflix
Cristina Costantini and Kareem Tabsch had just finished filming their documentary about famed Puerto Rican astrologer Walter Mercado when he died in November of 2019. At the height of his fame, Mercado reached around 120 million people with his messages of love and hope – before he mysteriously went off the air in the 2000s. The result became Mucho Mucho Amor, a tribute to the man behind many sequined capes that reveals what happened to Mercado before and after his time as one of TV’s most charismatic personalities. Writing for The Wrap, Carlos Aguilar called Much Mucho Amor “a tribute as inspired and jubilant as its majestic subject, a true original.”

Bloody Nose, Empty Pockets, Distributor: N/A
In the waning months of 2016, documentarians Bill Ross IV and Turner Ross filmed the closing night of a local Las Vegas bar, capturing the patrons’ tearful goodbyes and plenty of dazed stares from one too many drinks. Only, the premise was actually a set-up: the bar is still open (and located in New Orleans), and everyone involved was instructed to behave as if the set-up were true. Nevertheless, the film is full of genuine emotions coming from normal people, blurring the lines between documentary film and traditional narrative. Amy Nicholson of Variety wrote, “It’s The Bachelorette wed to The Iceman Cometh: the setup is staged, but the tears are real.”

Dick Johnson is Dead, Distributor: Netflix
With her feature debut, Cameraperson, Kirsten Johnson emerged as one of the documentary world’s most exciting new voices. Her next project, Dick Johnson is Dead, is radically different but no less inventive, challenging the way we talk about and imagine faith, aging, death, and the afterlife. As Johnson follows her own father’s struggles with memory loss, the two confront the inevitable with plenty of laughs and heartfelt moments. Nick Allen of RogerEbert.com called it “a gorgeous blend of truth and fiction, with a guiding sense of humor that allows her film to always be honest and hilarious.”

On the Record, Distributor: HBO Max
Although Kirby Dick and Amy Ziering’s documentary On the Record may have first caught the national spotlight after the departure of one of its top producers and a distributor, they bounced back at the Sundance Film Festival with a rapturous premiere screening. Their movie follows Drew Dixon as she recounts in vivid detail the night Russell Simmons assaulted her and processes the impact it eventually left on her career, wrestling with the pressure of coming forward in the wake of the #MeToo era. Her story was later painfully corroborated by several women who Simmons also harassed or assaulted. Beandrea July wrote in The Hollywood Reporter, “The overall result is an intimate look at what is at stake when rape victims decide whether or not to tell their stories.”

Welcome to Chechnya, Distributor: HBO
David France heads to closed-off Chechnya to meet the LGBTQ activists bravely combating the government-sanctioned violence against their community and helping others escape almost certain death. The documentary captures their struggle against the persecution of LGBTQ individuals and anyone seen supporting them, as the international press is shut out and the Russian government turns a blind eye to the carnage. Alonso Duralde of The Wrap called the film “a chilling examination of both the brutality that the Chechen LGBT community is forced to face on a daily basis and the difficulty of leaving the country for peace and safety.”

The Painter and the Thief, Distributor: N/A
After two of Barbora Kysilkova’s paintings are stolen from an art gallery in Oslo, the artist approaches one of the men accused of stealing them, Karl-Bertil Nordland, and offers to paint his portrait in the hopes of learning where her still-missing paintings may have gone. Instead, the two strike up an unlikely friendship over several years. Benjamin Ree’s The Painter and the Thief won the World Cinema Documentary Special Jury Award for Creative Storytelling at the Sundance Awards on Saturday. Esther Zuckerman said in Thrillist, “Norwegian documentary filmmaker Ree paints a remarkable portrait of two lives that become intertwined.”

The Fight, Distributor: Magnolia Pictures
Co-directors Elyse Steinberg, Josh Kriegman, and Eli Despres reunite after their first project together, Weiner, to film the ongoing saga of what it’s like to be an ACLU lawyer in the Age of Trump. It’s a behind-the-scenes look at headlines and the high-stakes battles for freedom behind closed doors. The film won the U.S. Documentary Special Jury Award for Social Impact Filmmaking at the Sundance awards ceremony. Kate Erbland wrote in Indiewire, “The unfussy stuff, the human stuff, is what works best, both for The Fight and the very people it follows.”

Feels Good Man, Distributor: N/A
First-time filmmaker Arthur Jones follows the riveting transformation of the viral Internet character Pepe the Frog from an innocent comic figure to a symbol for internet trolls and the far right. Pepe’s creator, Matt Furie, now wants him back, but is it too late to save the frog’s reputation on the internet? Feels Good Man explores the unruly nature of internet meme culture and reveals how few rights creators have over their creations once they’re online. Jones won the U.S. Documentary Special Jury Award for Emerging Filmmaker. Angie Han of Mashable wrote, “Jones demonstrates an insatiable curiosity about his subject, speaking with everyone from a former Trump campaign insider to a collector of Rare Pepes to an expert on the occult.”

Collective, Distributor: Magnolia Pictures
As one of the standouts in the festival’s Spotlight section, Collective remained a must-see title, as director Alexander Nanau documents the step-by-step unfolding of a tragedy with in-depth details and breathtaking footage. After a devastating fire at a night club killed many and seriously injured several dozens more, investigative reporters discovered the government blocked survivors from life-saving treatments and covered up health code violations that led to the loss of several more lives. The harrowing account raises questions about who should be held accountable, if anyone will be at all. Vikram Murthi wrote for The Film Stage, “Collective sports a procedural-like pace that keeps the information legible and the action linear. It doesn’t preclude a lighthearted touch nor get bogged down in misery to underline its points.”