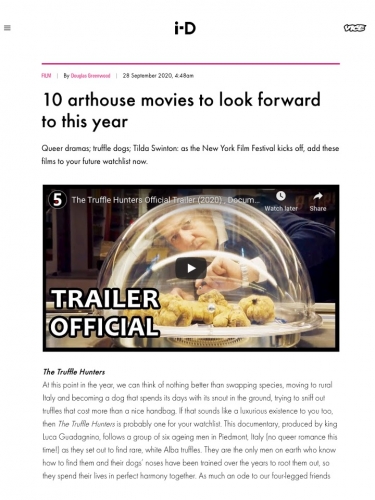 Sitting in a cinema is now an alien concept to so many, but that doesn’t mean that a time won’t come when the worst of this has passed, and dark, air-conditioned rooms in which you sit in close proximity to strangers won’t feel like you’re flirting with death. Those days are, if all goes well, closer than you might think. But in the meantime, the world’s major film festivals — launchpads for both the movies that go on to become cult classics and Oscar hopefuls — have been adapting to the current landscape. Some have cut their screening attendance in half, like Venice Film Festival; others, like New York Film Festival, which kicked off last week and will run until October 11, are mixing drive-in screenings with digital ones too. Long story short, just because cinemas are taking a hard-hit right now, that doesn’t mean we shouldn’t be gearing up for an illustrious movie season once coronavirus dies down. Here are 10 films from the NYFF line-up that will very soon be making their way to your theatre (or laptop screen) too. Add them to your watchlist in anticipation.

The Truffle Hunters
At this point in the year, we can think of nothing better than swapping species, moving to rural Italy and becoming a dog that spends its days with its snout in the ground, trying to sniff out truffles that cost more than a nice handbag. If that sounds like a luxurious existence to you too, then The Truffle Hunters is probably one for your watchlist. This documentary, produced by king Luca Guadagnino, follows a group of six ageing men in Piedmont, Italy (no queer romance this time!) as they set out to find rare, white Alba truffles. They are the only men on earth who know how to find them and their dogs’ noses have been trained over the years to root them out, so they spend their lives in perfect harmony together. As much an ode to our four-legged friends as it is to the dedication involved in finding these highly coveted nuggets, this is set to be a sweet, languorous way to spend a couple of hours.

Lovers Rock
Steve McQueen is a contemporary artist and legendary film director known for 12 Years A Slave, Shame and 2018’s women-helmed heist thriller Widows. His work has constantly flitted between themes of pain, desire and the lived experiences of Black people throughout history. His latest project, Small Axe, is a shining example of the latter. For his first British-based project, Steve has created a five-part TV series (that also functions as a quintet of cinematic vignettes) about the British West Indian community in the late 20th century. Its shining centrepiece, from what we’ve seen so far, is Lovers Rock: a fictional love story set over one evening in 80s west London, as a group of friends and strangers gather for a woozy house party, dancing together to the sounds of Reggae, RnB and soul. Starring Top Boy’s Micheal Ward and newcomer Amarah-Jae St Aubyn, it’s a euphoric, if minute, love story that allows you to live in its world for a brief hour. It’s a masterpiece, too.

David Byrne’s American Utopia
Having already bagged one big feature this year in the form of Netflix’s war caper Da Five Bloods, Spike Lee has lent his directorial eye to another project: a live concert film of David Byrne’s hotly tipped American Utopia show. Recorded on New York’s Broadway last year, the production -- which will air on HBO after playing at several film festivals -- was widely seen as a big critical success with live music critics. Now it’s been eternalised on film for the world to see. Rolling Stone has already called this “a flat out masterpiece”.

he Human Voice
Pedro Almodóvar has built a career from his salacious Spanish-language dramas, oozing with campiness and melodrama. That he chose Tilda Swinton — an actor known for her left-field approach to performance and sizeable gay fanbase — to head up his English language debut is hardly surprising. Just 30 minutes in length and based on a Jean Cocteau play, The Human Voice is a monologue that captures a woman on the phone to her ex-husband the day before he is due to remarry. The film follows a very similar plot, and was shot at the end of July having been rescheduled due to coronavirus. That Pedro managed to turn it around in time for the Venice Film festival, just a few weeks later, is a minor miracle.

On the Rocks
Ah, Sofia Coppola! Movie queen, maker of The Bling Ring and proud purveyor of actually interesting women in cinema. Her latest, On the Rocks, was produced by Apple and A24, and stars Bill Murray and Rashida Jones as a dad and daughter duo who run amok in New York, trying to discover if Rashida’s character’s husband is cheating on her. The actress is best known for her turns in The Office and Parks and Recreation, and gets to flex her comedy chops here: On the Rocks is, like a lot of Sofia Coppola’s work, a warm-hearted and yet wise look into familial relationships.

Time
Having premiered at Sundance Film Festival back in January (when watching movies wasn’t brought to you with a pinch of existential dread), Garrett Bradley’s Time has been at the top of many critics’ watchlists. The documentary tells the story of a Louisiana woman called Fox Rich, who campaigns for over two decades for the release of her husband from prison — he’s serving a 60-year sentence for robbery.  Created using a mix of archive footage and black-and-white cinematography, the film is an evocative and upsetting look at mass incarceration in the US. So evocative, in fact, that it won Garrett Bradley the prize for Direction (Documentary) at Sundance this year. Expect this to be the most talked-about documentary come Oscars 2021.

Nomadland
Chloe Zhao has dedicated her life to chronicling the stories of those who live on the fringes of society. It was South Dakota’s Pine Ridge Indian Reservation in 2015’s Songs My Brother Taught Me. Then it was a lonely bronco horseback rider in 2017’s flawless The Rider. Her latest is, as it stands, the front-runner for the Best Picture prize at next year’s Oscars. Having won Venice’s Golden Lion and the Audience Award at Toronto Film Festival, Nomadland is an understated picture that’s almost accidentally gunning for big awards glory. Starring Frances McDormand, the movie is set in Nevada after the global recession of the late 00s, it follows Frances’ character as she sets out on the road to live life as a nomad, starting again in a country on the brink of collapse.

MLK/FBI
Another documentary that’s earning a lot of industry whispers is MLK/FBI. Directed by Sam Pollard, an American filmmaker known for his past collaborations with Spike Lee, it lays out the evidence that J. Edgar Hoover’s government was sanctioning the FBI to tap Martin Luther King’s phone lines. Using recently declassified files, and created off the back of US historian David Garrow, it’s an unfiltered look at what  the former FBI director James Comey calls “the darkest part of the bureau’s history”. But it also offers a unique portrait of MLK’s life: not wholly celebratory, it delves into the rumours of extra-marital affairs the civil rights pioneer engaged in too.

French Exit
Michelle Pfeiffer and Lucas Hedges in a movie about a penniless, recently widowed American socialite and her son moving to Paris to live out their exuberant, false new life, accompanied by a cat the widow believes is her dead husband reincarnated? Sign us the fuck up.  This new dark comedy from indie filmmaker and A24 fave Azazel Jacobs looks, quite frankly, wild, and has been one of the most anticipated films of the year ever since it was announced that the underused Michelle P would have a starring role. Details about this are slim, but it’s set to close the New York Film Festival in a few weeks before opening internationally in February next year.

I Carry You With Me
You know nothing gets us more excited than a beautifully shot queer drama – and alas! Here’s the one you’ve been waiting for this year! Set in Puebla, Mexico in 1994, this decades-spanning story of two gay lovers is about the external conflicts that push and pull them apart: culture, border politics and the legal implications of being queer and oppressed in a Central American city. Over the course of the movie, which apparently has the same realistic flares as Moonlight and the work of Terrence Malick, we watch Ivan and Gerardo meet, make sense of their connection, and try to form something special while oppression and fear linger in the air. A big hit at Sundance, I Carry You With Me will hit cinemas worldwide in early 2021.

The New York Film Festival runs from September 17 to October 11. Tickets for outdoor and digital screenings can be found here. All of these titles will be released later this year or in early 2021.