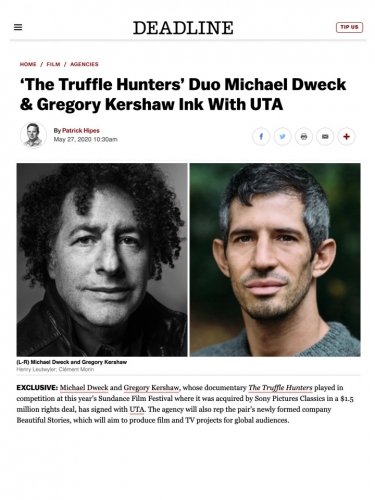 EXCLUSIVE: Michael Dweck and Gregory Kershaw, whose documentary The Truffle Hunters played in competition at this year’s Sundance Film Festival where it was acquired by Sony Pictures Classics in a $1.5 million rights deal, has signed with UTA. The agency will also rep the pair’s newly formed company Beautiful Stories, which will aim to produce film and TV projects for global audiences.

The Truffle Hunters follows a group of aging men in Northern Italy who hunt the woods for the Alba truffle, using a certain breed of dogs to sniff out the culinary treasures and working at night to hide their trail and keep outsiders from poaching their supply. It was Dweck and Kershaw’s second feature-length film together; Dweck made his directorial debut on the 2018 Sundance docu The Last Race, on which Kershaw served as director of photography.

Dweck is also an acclaimed visual artist known for his narrative photography, with his projects featured in solo and group exhibitions at museums and galleries around the world, As a creative director, Dweck received several awards including the Gold Lion at Cannes Lions. Kershaw, a documentary and narrative filmmaker, has written and directed numerous narrative short films.